On Tuesday January 4, 2022, at approximately 2:22 pm, officers from the Manchester Township Police Department responded to the intersection of State Highway 37 and Colonial Drive to investigate a motor vehicle crash involving a commercial truck hauling a trailer colliding into a vehicle, a traffic signal, an electric sign board, a traffic sign and a utility pole.

Upon arrival, officers observed a blue, 2017 Honda Pilot, facing southwest in the intersection, in-between the eastbound and westbound lanes of State Highway 37 with extensive rear end and passenger side damage.  The Honda’s side curtain airbags deployed as a result of the crash.  A white, 2017 Ford F550 commercial truck, owned by Sano Drilling Inc., was observed on the westbound shoulder of State Highway 37 facing northeast.  The Ford was hauling a trailer carrying a John Deere 75G Excavator. The Ford sustained extensive damage to the front end, driver side, and passenger side, as well as, having front airbag deployment.  The investigation revealed that the Honda was traveling westbound on State Highway 37 slowing to a stop for the traffic light at the intersection of Colonial Drive.  The Ford was traveling behind the Honda when the operator of the Ford became distracted and did not observe the Honda coming to a stop.  The Ford then collided into the rear end of the Honda causing the Honda to spin into the intersection.  The Ford veered off the roadway onto the westbound shoulder where it impacted the traffic signal, electronic sign board, traffic sign, and utility pole causing extensive damage to each.  The collision caused the trailer to jackknife and impact the Ford on the passenger side. 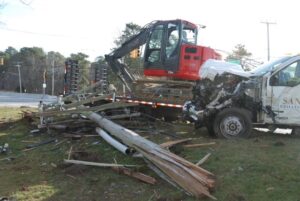 The driver of the Honda, 53-year-old, Elizabeth Hughes of Jackson NJ, suffered a complaint of pain to her head and was evaluated by EMTs from the Manchester Township Division of Emergency Services.  Hughes denied further medical attention.  The driver of the Ford, 47-year-old, Robert Moyer 3rd, of Barrington NJ, did not report any injuries as a result of the motor vehicle crash.  Drivers of both vehicles were determined to have been wearing their seatbelts. 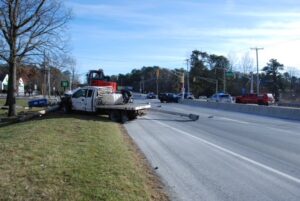 The intersection was closed causing major traffic delays while officers conducted the investigation and emergency road crews worked on the utility pole and traffic signal.  Assisting at the scene were New Jersey State Police, Lakehurst Police, EMTs and Firefighters from the Manchester Township Division of Emergency Services, Firefighters from the Whiting Volunteer Fire Department, Manchester Township Volunteer Fire Department and the Ridgeway Volunteer Fire Department, as well as the Manchester Township Office of Emergency Management Director Arthur Abline.  JCP&L employees are currently working on repairing the damaged utility pole and wires.  The New Jersey Department of Transportation employees are currently working on repairing the traffic signal at the intersection. 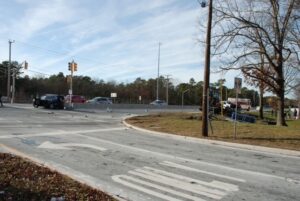 The investigation into the crash is still ongoing, but at this point driver inattention appears to be the primary contributing factor.  The crash is being investigated by Patrolman Michael O’Hara of the department’s Traffic Safety section.