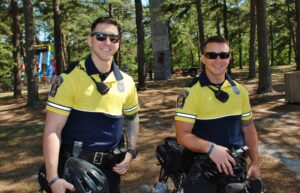 The Manchester Police Bicycle Unit consists of four Cannondale Police Package Mountain Bicycles as well as several Manchester Police Officers who have completed a forty-hour specialized training class. The Bicycle Unit is utilized to supplement patrol during several events throughout the year including Manchester Day and 4th of July Fireworks, Mischief Night and Trick-or -Treat and High School and Middle School Graduation Ceremonies. The Bicycle Unit maybe called into to service at any time throughout the year based on need, either for crowd control, rapid or stealth response, or visible, proactive and community based policing. The Bicycle Unit is an added tool afforded to officers when patrolling special events, shopping centers and neighborhoods as they provide for rapid response to areas where a patrol vehicle is unable to go as well as high visibility and accessibility to residents of the township.

As a result of the generous donations made by local businesses, including Carmona Bolen Funeral Home, Pine Belt Chevrolet in Lakewood, and the Ocean County Chiefs of Police Association, the Manchester Police Bicycle Unit was able to update from older, outdated patrol bicycles to these newer, top of the line Law Enforcement Cannondales. Each bicycle is outfitted with head lights, a rear tail light, and a horn. Each is also equipped with a supply bag to carry first aid equipment.

Several Manchester Police Officers have successfully completed the forty-hour training course which includes off-road riding, climbing and riding down stairs, cone courses and emergency braking. The training is an eye opening experience which provides insight into both the capabilities and restrictions associated with operating a bicycle. This training also serves to improve the officer’s confidence and ability to safely and effectively utilize these resourceful tools. Upon successful completion of the training course, each officer is provided with a specific bicycle patrol uniform which consists of a yellow and navy blue polo shirt with reflective lettering, navy blue cargo shorts, and a police bicycle helmet.