On Monday, June 6, 2022, at approximately 10:25 am, officers from the Manchester Township Police Department responded to the intersection of State Highway 70 and Manchester Boulevard/Beckerville Road for the report over an overturned dump truck. 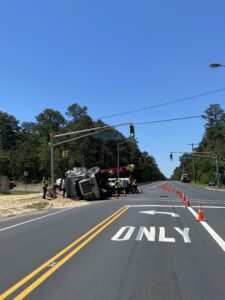 This Crash is being investigated by Patrolman Conner Yatauro of the department’s Traffic Safety section.