On April 30, 2022, at approximately 2:17 p.m., members of the Manchester Township Police Department responded to Pasadena Road near the intersection of Mt. Misery Road, in the Whiting Section of the township, to investigate a motor vehicle crash involving two motorcycles.

Upon arrival, officers observed a black 2013 Harley Davidson Road King Motorcycle laying on it’s side adjacent to the wood line on the eastbound shoulder of Pasadena Road and a blue 2018 Indian Chieftain Motorcycle in the center of the eastbound lane, upright, on it’s kickstand.  The driver of the Harley Davidson Motorcycle, 66-year-old, Paul Brinkman, was severely injured.  Life saving measures were attempted, however, Brinkman succumbed to his injuries and was pronounced dead at the scene.  The driver of the Indian Motorcycle, 57-year-old, Michael Varcadipane, sustained injuries to the right side of his body but refused any further medical attention.  The investigation determined that Brinkman was not wearing a Department of Transportation approved helmet but Varcadipane was. 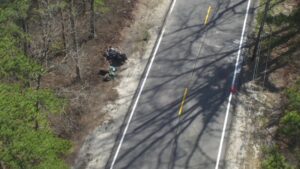 The investigation revealed that Brinkman and Varcadipane were traveling together eastbound on Pasadena Road in a staggered formation with Brinkman traveling behind Varcadipane.  Varcadipane observed a disabled motorcyclist on the westbound shoulder of Pasadena Road and attempted to pull over onto the eastbound shoulder to assist the disabled motorcyclist.  As Varcadipane began to decelerate and pull off the roadway, Brinkman failed to react in time and collided with the Indian Motorcycle.  The left front end of the Harley Davidson Motorcycle impacted the right front end of the Indian Motorcycle causing both motorcyclists to lose control and subsequently be ejected from their motorcycles.

Assisting at the scene were detectives from the Ocean County Sheriff’s Crime Scene Investigations Unit, Investigators from the Ocean County Medical Examiner’s Office, EMTs from the Manchester Township Division of Emergency Services, Medics from Robert Wood Johnson University Hospital, Fire Police from Whiting Volunteer Fire Department, and the New Jersey State Park Police.  The roadway was closed in the area of the crash for several hours while officers conducted the investigation.  The investigation into the crash is still ongoing, but at this point, following too closely and rider inattention appear to be the primary contributing factors.  This crash is being investigated by Ptl. Michael O’Hara of the department’s Traffic Safety Unit.