Motorcyclist Transported to Trauma Center After Collision with Vehicle

Motorcyclist Transported to Trauma Center After Collision with Vehicle

On Saturday, August 13, 2022, at approximately 2:44 pm, members of the Manchester Township Police Department responded to the area of the Manchester Boulevard and Lakewood Avenue for the report of a motorcycle collision with injuries, in the Whiting section of the township.  Upon arrival, officers located a 2011 Honda motorcycle in the roadway and a 2011 Subaru Legacy with rear end damage parked on the shoulder of Manchester Avenue.

The investigation revealed that the operator of the motorcycle was traveling east on Manchester Avenue when an unknown vehicle pulled in front of the motorcyclist causing him to swerve around them.  Once back in the lane of travel, the motorcyclist applied its brakes and started to skid before colliding into the Subaru, which was stopped on Manchester Avenue waiting to make a left turn.  The driver of the Honda, 32 year-old Mark Britt of Manchester, was wearing a DOT helmet and transported to Jersey Shore University Medical Center in Neptune, NJ where he is listed in stable condition for a leg injury.  The driver of the Subaru, 25 year-old Jordan Quigley of Whiting, was wearing her seatbelt and did not sustain any injuries. 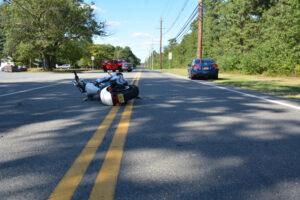 Assisting at the scene were members of the Whiting Volunteer Fire Department, Paramedics from Robert Wood Johnson, and EMTs with the Manchester Emergency Medical Services.  The crash remains under investigation by Sergeant Ian Bole of the Manchester Township Police Department Traffic Safety Unit.