Upon arrival, officers observed a 2006 Chevy Cobalt, tan in color, and 2017 Manchester Township Police Ford Explorer, blue in color, in the middle of the intersection. The preliminary investigation revealed that the Manchester Township Police vehicle was traveling west on Commonwealth Boulevard as it approached the intersection of Pemberton Street. The Chevy Cobalt was traveling south on Pemberton Street as it approached the intersection of Commonwealth Boulevard.  Pemberton Street is controlled by a stop sign at the intersection with Commonwealth Boulevard. The driver of the Chevy Cobalt stated that she never saw the Police vehicle prior to pulling out into the intersection.  The driver of the Chevy Cobalt, identified as 24 year old Candy Mannix of Manchester, was treated for injuries sustained in the crash at the scene by Manchester EMS but refused further medical treatment. The driver of the Manchester Township Police vehicle, identified as Stephen Hankins ,age 41, was transported to Jersey Shore Medical Center for further treatment of his injuries sustained in the crash. He was discharged by the time this released was generated. 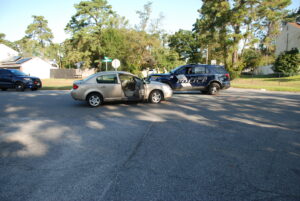 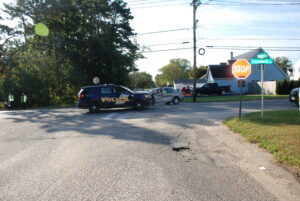