On Friday, July 23, 2021, at approximately 3:51 pm, officers from the Manchester Township Police Department responded to Pasadena Road in the area of Buckingham Road, in the Whiting Section of the township to investigate a motor vehicle accident involving a Jeep Wrangler that ran off the roadway and struck a tree. 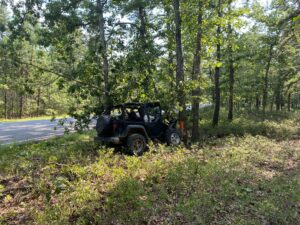 Upon arrival, officers observed a black, 1997, Jeep Wrangler, off the roadway and into the wooded area of the eastbound lane of travel on Pasadena Road. The investigation revealed that the Jeep was traveling eastbound on Pasadena Road, when the vehicle left the travel portion of roadway, and entered onto to the dirt shoulder. The vehicle then continued eastbound into heavy brush before impacting a large tree. The driver, identified as, 49-year-old, Daniel Amble of Allentown NJ, suffered head trauma and was flown to Jersey Shore University Medical Center in Neptune by medevac where he was listed in stable condition.

Assisting at the scene were EMTs from the Manchester Township Division of Emergency Services, as well as, Paramedics from Robert Wood Johnson University Hospital. The investigation into the crash is still ongoing, but at this point, failure to maintain lane appears to be the primary contributing factor. This crash is being investigated by Patrolman Conner Yatauro of the department’s Traffic Safety Section.