On Wednesday, September 22, 2021, at approximately 8:03 a.m., officers from the Manchester Township Police Department responded to the area of Pasadena Road near the Ocean County/Burlington County border to investigate a motor vehicle crash involving an overturned dump truck. 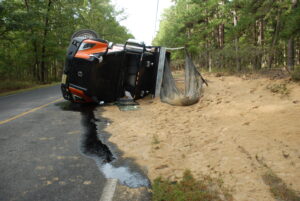 Upon arrival, officers observed a 2020 Volvo VNL dump truck overturned on the driver side in the southbound lane with sand scattered throughout the roadway and shoulder.  The investigation revealed that the dump truck was travelling northbound on Pasadena Road, when the driver, identified as 50-year-old Erick Castro-Perez, lost control of the dump truck and the passenger side tires entered onto the dirt shoulder.  The dump truck then reentered the roadway, crossed the centerline into the southbound lane of travel, and overturned. The 24 tons of sand being hauled by the dump truck subsequently spilled onto the roadway and shoulder.  The driver was transported to Community Medical Center in Toms River via ambulance for evaluation and treatment of non-life threatening injuries.  The roadway was closed for several hours during the investigation and cleanup. 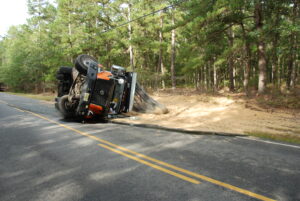 Assisting at the scene were EMTs and Firefighters from the Manchester Township Division of Emergency Services, as well as the Whiting Volunteer Fire Department.  The Ocean County Road Department was also on scene to assist with the cleanup.  The investigation into the crash is still ongoing, but at this point, driver error appears to be the primary contributing factor.  This crash is being investigated by Patrolman Michael O’Hara of the department’s Traffic Safety section.