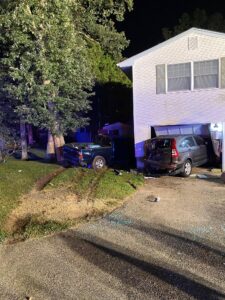 Witnesses on scene stated that the 2021 Hyundai Elantra was traveling south on County Route 571 at a high rate of speed and was weaving in and out of traffic. The 2005 Toyota Tacoma was traveling south on County Route 571 in the right travel lane. The 2021 Hyundai Elantra attempted to make a lane change into the right lane when it impacted the rear of the 2005 Toyota Tacoma. The impact from the collision caused the 2005 Toyota Tacoma to run of the road and enter onto the property of 1764 Lockhart Street. As the 2005 Toyota Tacoma entered onto the property of 1764 Lockhart Street, it impacted the rear of the 2010 Honda CR-V which was parked in the driveway of 1764 Lockhart Street. The impact caused the 2010 Honda CR-V to lurch forward, striking the residence and garage. After impacting the 2010 Honda CR-V, the 2005 Toyota Tacoma struck a shed that was located on the property. The 2021 Hyundai Elantra continued to travel south on County Route 571 crossing over the fog line and centerline of County Route 571 several times before coming to a stop on the northbound grass shoulder of County Route 571.
Further investigation into the accident revealed that the driver of the 2021 Hyundai Elantra, fled the scene on foot prior to police arrival. The driver of the 2021 Hyundai Elantra was later identified as, 29 year old, Alexis Connotillo of Manchester, NJ. The driver of the 2005 Toyota Tacoma, identified as 70 year old, Dominic Frizino of Manchester, NJ, was found to be uninjured at the time of the accident. The 2010 Honda CR-V was unoccupied at the time of the accident. The residence of 1764 Lockhart Street was examined by the Manchester Township Building Inspector and was deemed safe for the residents to remain in the household.
Assisting at the scene were EMTs from the Manchester Township Division of Emergency Services, firefighters from Manchester Volunteer Fire Company and Ridgeway Volunteer Fire Company, Ocean County Sheriff Departments K-9 Unit, the Manchester Township Police Department Drone Unit, and the Manchester Township Building Inspector.
The investigation into the crash is still ongoing, but at this point, the contributing factors of the accident are, unsafe speed, improper lane change and following too closely. This crash is being investigated by Patrolman Conner Yatauro of the Manchester Township Traffic Safety Section.
By MPD|2021-09-16T16:27:24-04:00September 16th, 2021|Manchester Police News|Comments Off on Driver Flees The Scene of Three Car Motor Vehicle Accident