On Monday, October 3, 2022, at approximately 4:37 pm, officers from the Manchester Township Police Department responded to the area of Schoolhouse Road and Gardenia Drive in the Whiting Section of town to investigate a motor vehicle crash involving an overturned vehicle with an entrapped driver.

Upon arrival to the scene, officers observed a 2019 Kia Optima in the wood-line adjacent to the roadway.  The Kia was overturned on its roof and a large pine tree had been severed at its base and was lying across the vehicle. The investigation revealed that the Kia had previously rear ended another vehicle approximately one half mile north of this location at the intersection of Schoolhouse Road and County Route 530.  The other vehicle involved was determined to be a 2015 Volvo S60, which only sustained minor damage.  The Kia attempted to flee the scene of this crash, and in doing so, failed to properly negotiate the curve on Schoolhouse Road near Gardenia Drive, and left the roadway.  The Kia then stuck a large pine tree and overturned as a result, sustaining extensive damage to the entire vehicle and entrapping the driver.

The driver of the Kia, identified as 31 year old Christopher H. Cornell Jr. of Seaside Heights, was extricated from the vehicle and transported via Medevac helicopter to Jersey Shore University Medical Center for treatment and evaluation of non-life threatening injuries.  Furthermore, he was found to be in possession of a controlled dangerous substance, and suspected to be under the influence of intoxicating liquor and/or drugs.

The driver of the Volvo, identified as 47 year old David J. Lobdell of Lanoka Harbor, reported minor injuries on scene and refused any medical attention.

Assisting at the scene were members of the Whiting Volunteer Fire Department, Manchester Township Emergency Medical Services, Robert Wood Johnson Paramedics, RWJ Life Flight, and Accurate Towing.  The investigation into this crash is still on going, however, driver impairment and unsafe speed for road conditions appear to be the cause of the crash.  Motor vehicle and criminal charges are pending at this time.  This crash is being investigated by Cpl. Collins and Ptl. Jesse Hoydis of the department’s Traffic Safety Unit. 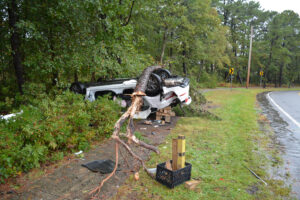