On Saturday, February 19, 2022, at approximately 1:15 am, officers from the Manchester Township Police Department responded to the area of County Route 571 and Quarry Road, to investigate a motor vehicle crash involving a single motor vehicle which collided into multiple trees.

Upon Arrival, officers observed a silver, 2001, Ford Taurus with extensive driver side damage along the property line of 3454 Ridgeway Road. The investigation revealed that the Ford was negotiating a curve on Route 571, when the driver lost control and impacted a tree. This initial collision caused the vehicle to continue into another smaller tree, before coming to rest in a wooded area. 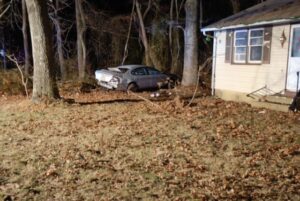 The driver of the Ford, 21-year-old Sean Page of Howell, was injured due to partial ejection caused by not wearing a seatbelt during impact. Mr. Page was subsequently transported via ambulance to a landing zone, where he was then airlifted by medevac helicopter to Jersey Shore University Medical Center in Neptune. Mr. Page sustained life threatening injuries and is currently listed in critical condition.

The investigation into this crash is still ongoing, but at this time speed appears to be a contributing factor. Assisting at the scene were members of the Ridgeway Volunteer Fire Department, Manchester Volunteer Fire Department, Manchester Township Division of Emergency Service EMTs, as well as Robert Wood Johnson Paramedics. This crash is being investigated by Patrolman Keith Douglas of the department’s Traffic Safety Unit.