On Saturday, February 13, 2022 at approximately 5:56 pm, officers from the Manchester Township Police Department responded to the intersection of State Highway 70 and Colonial Drive to investigate a motor vehicle accident involving three motor vehicles in the intersection. 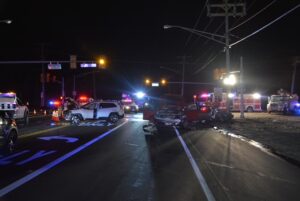 The driver of the Nissan Alitima, Roy Deronde Jr., was charged with, Assault by Auto, Leaving the Scene of an Accident Causing Serious Bodily Injury, Hindering Apprehension and Obstruction of Justice.  As the investigation is continuing there is a potential that Mr. Deronde could be facing additional charges.  The whereabouts of Mr. Deronde are not known, however there is an active warrant for his arrest.

Assisting at the scene were EMTs from the Manchester Township Division of Emergency Services, volunteer firefighters from Manchester Volunteer Fire Company and Ridgeway Volunteer Fire Company, New Jersey Central Power and Light, Ocean County Sheriff’s Department, Lakehurst Police Department, the New Jersey State Police Aviation Unit. The investigation into the crash is still ongoing, but at this point, the disregard of a traffic control device, and a high rate of speed is the contributing cause of the motor vehicle accident. This crash is being investigated by Patrolman Conner Yatauro of the Manchester Township Traffic Safety Unit.  Anyone who may have information as to the whereabouts of Roy Deronde is asked to contact the Manchester Police at 732-657-6111.  As always callers can remain anonymous.  Please keep in mind that, although Roy Derone has been charged criminally, he is innocent until proven guilty in the Court of Law.