The Manchester Township Police Department is pleased to welcome two Patrolmen, Lorenzo Jorge and Connor Maliff, and two Firefighters, Danielle Curiale and Levar Wright, who were sworn in by Mayor Robert Hudak on February 9, 2022, in front of family, friends and police personnel. 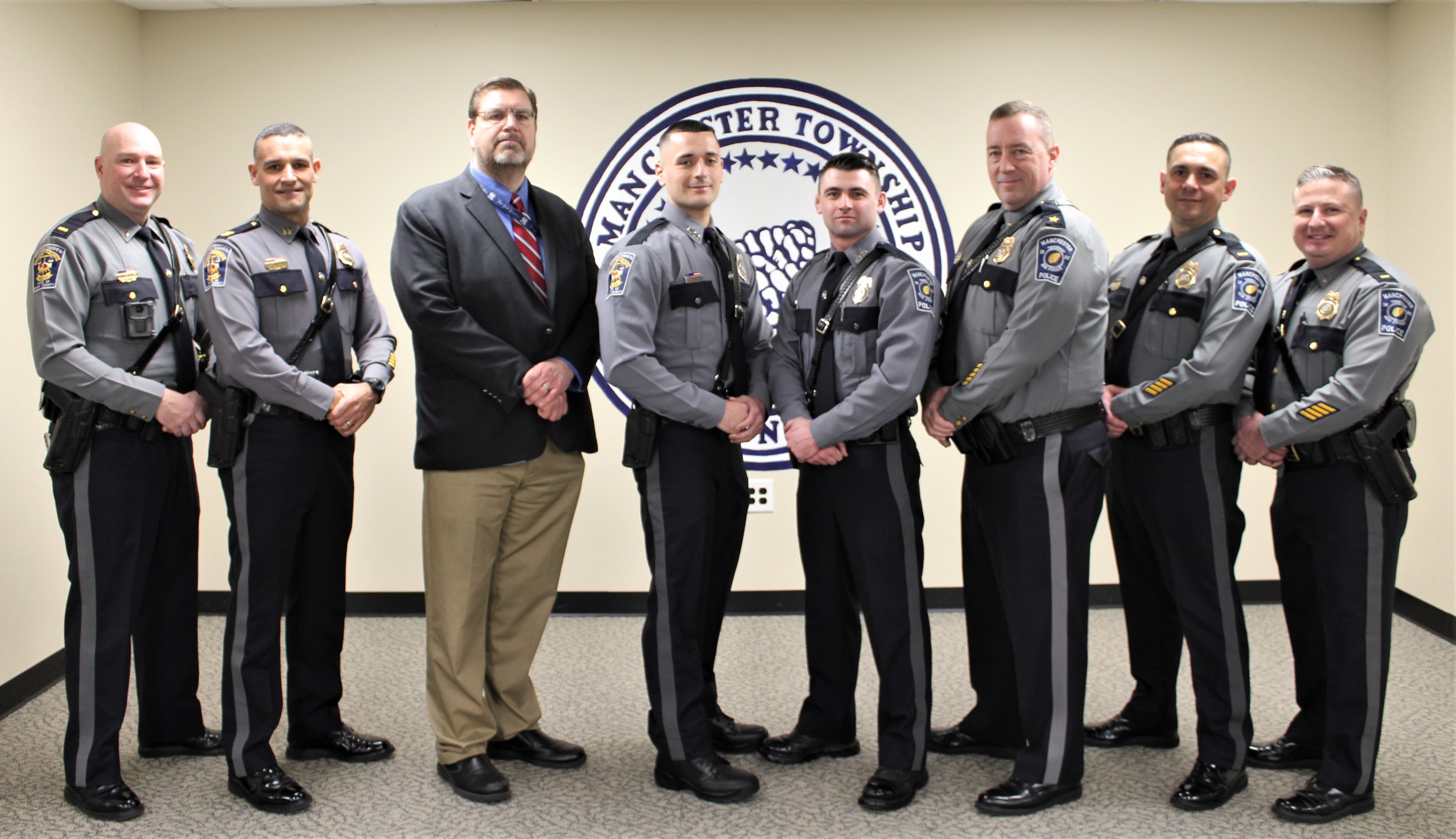 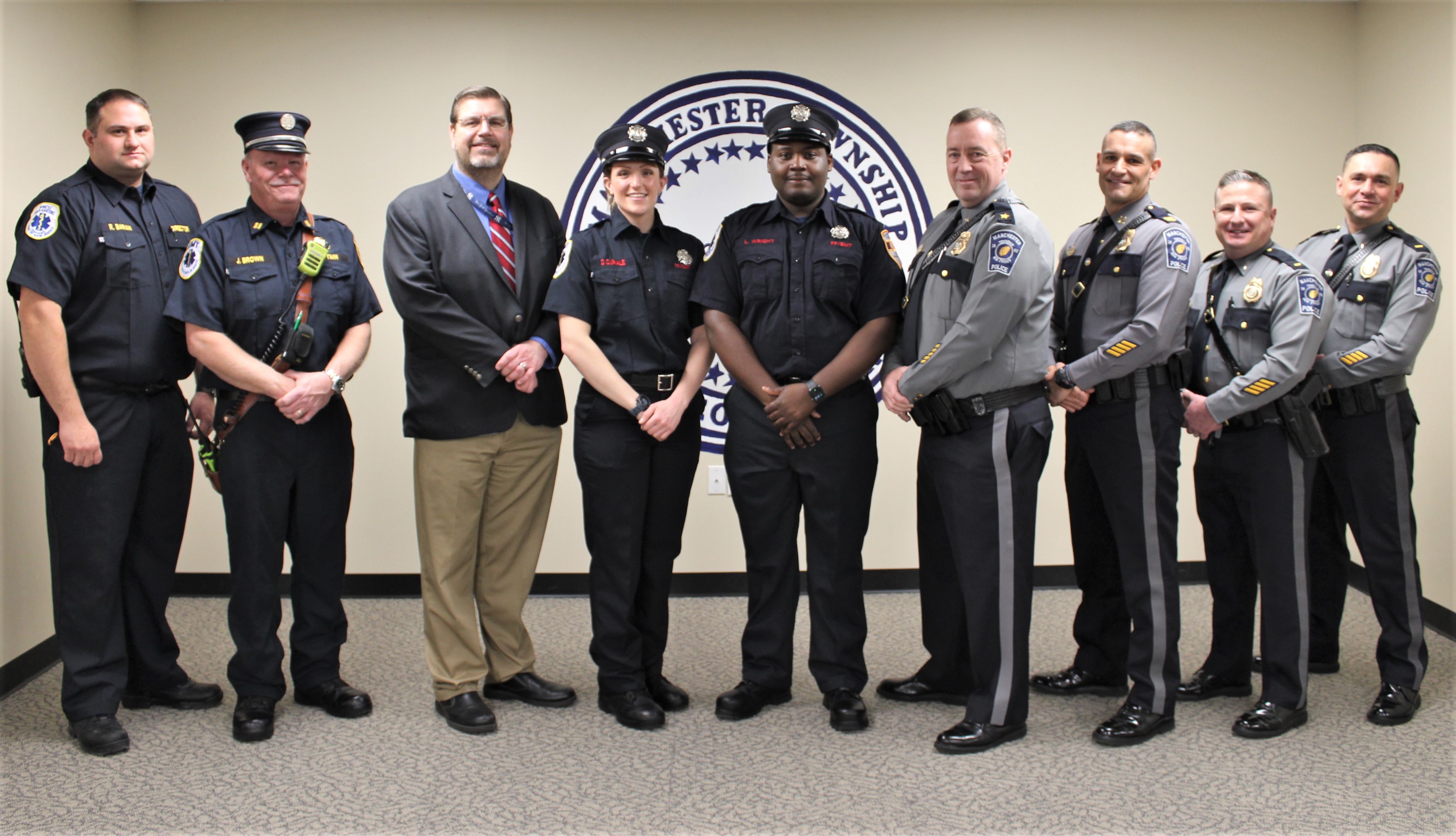 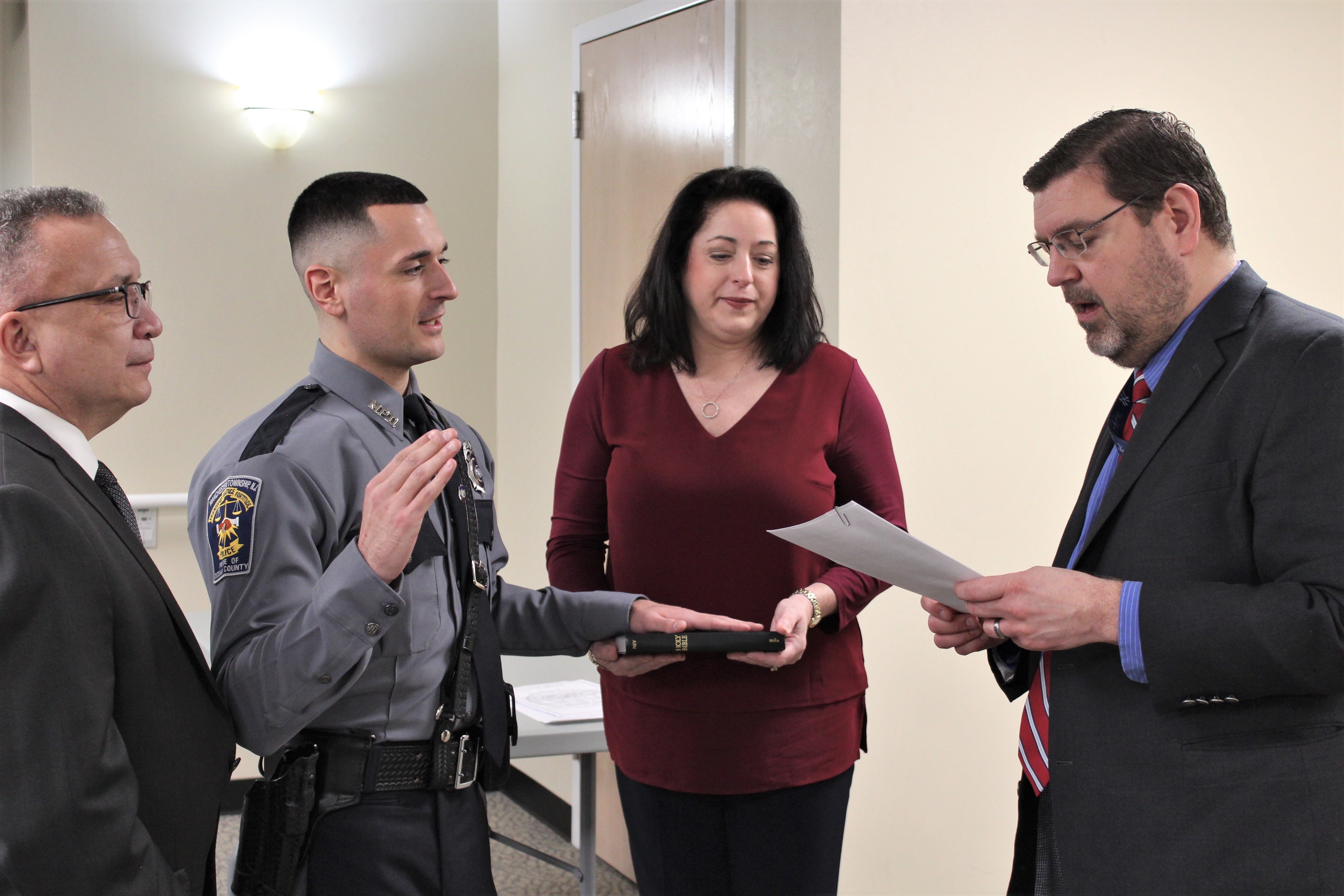 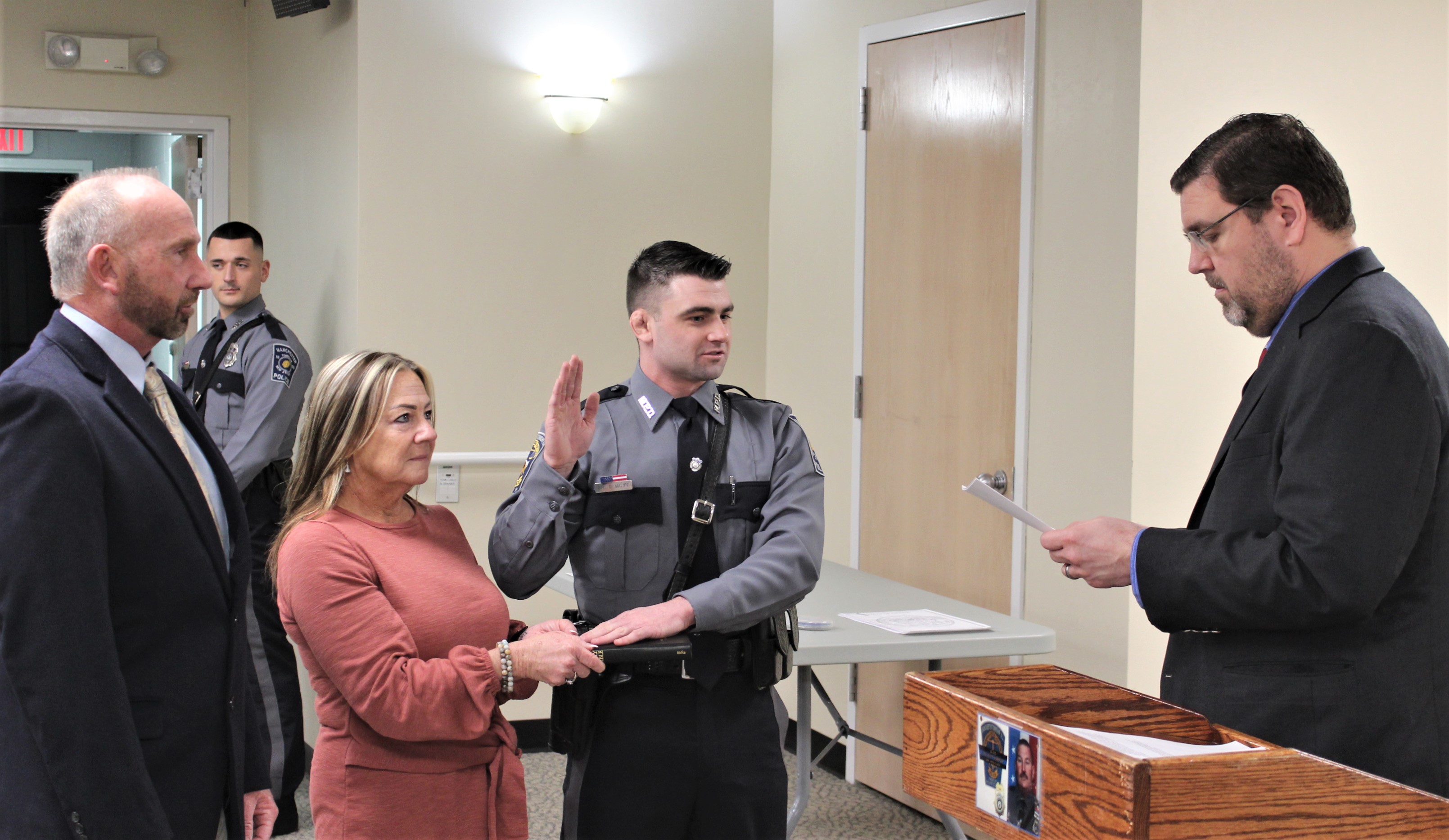 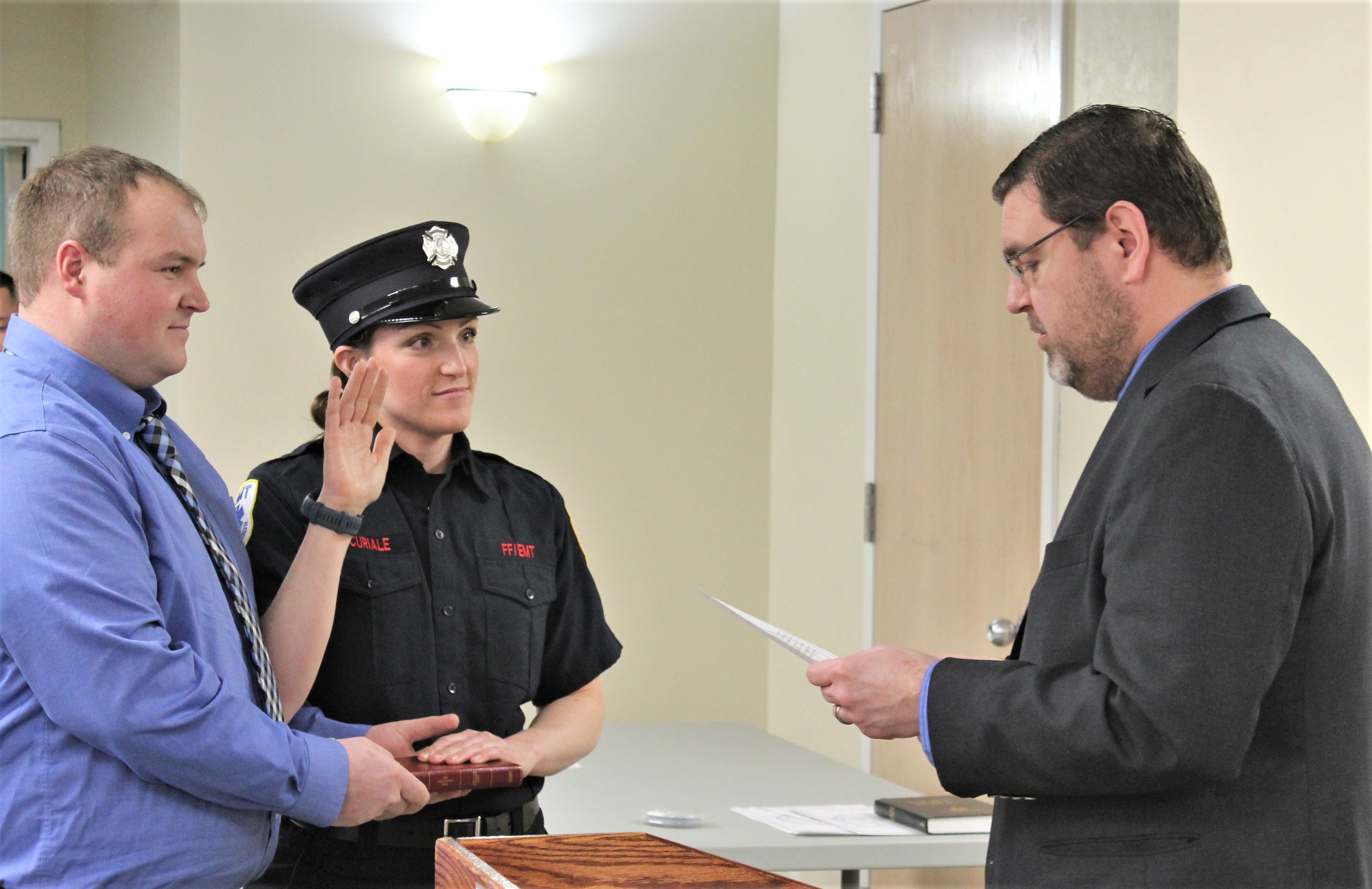 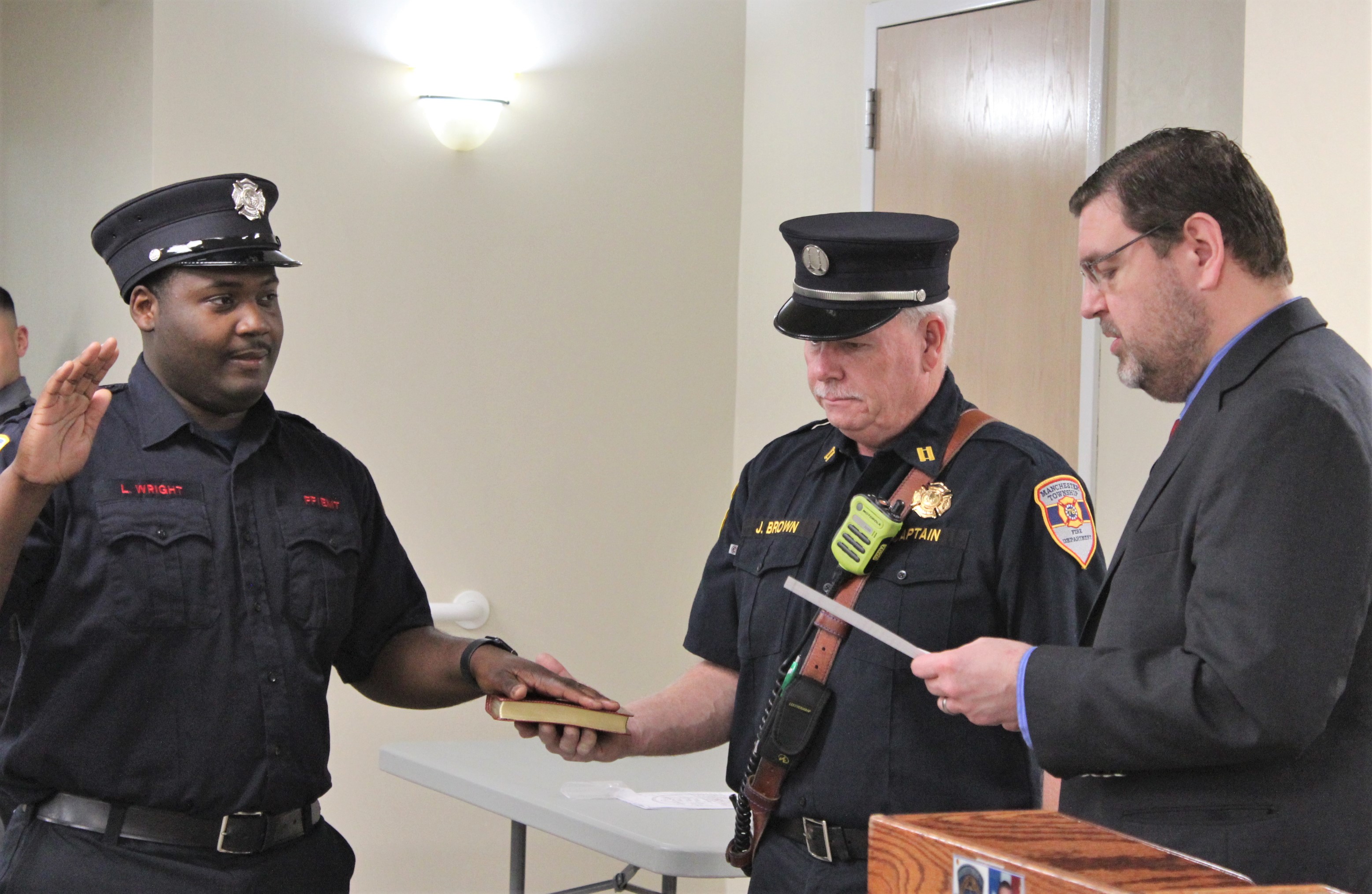 Taking the oath first was Ptl. Jorge, who currently resides in Manahawkin. Ptl. Jorge grew up in Old Bridge where he was an honor roll student. He graduated from Rutgers University in 2021 with a bachelor’s degree in Criminal Justice and began his career in law enforcement in January 2021, when he was sponsored by the Seaside Park Police Department to attend the Ocean County Police Academy for Class II Special Law Enforcement Officers. He graduated the police academy in May 2021 and began work as a SLEO II with the Seaside Park Police Department.

Ptl. Maliff was born in Brick, where he attended Brick Memorial High School and was a participant in the wrestling program. He graduated East Stroudsburg University in 2017 with a bachelor’s degree in Business Management. Beginning his law enforcement career, Ptl. Maliff was hired by the Sea Girt Police Department in January of 2020 and attended the Atlantic County Police Academy 22nd Class. With the completion of the academy, Ptl. Maliff was assigned as a SLEO II with the Sea Girt Police Department.

“The high standards of our pre-employment testing can only be met by those individuals who are truly dedicated to excelling in the law enforcement profession,” said Chief Dolan. “Ptl. Maliff and Ptl. Jorge have proven that they are immensely qualified to join the Manchester Township Police Department, and I’m confident that they will serve the residents of our community with honor and integrity.”

The swearing in ceremony was led by Chief Dolan, who explained that the intensive Manchester Township Police Department hiring process began in July of 2021, when approximately 80 individuals submitted their applications for employment. For the first phase, applicants participated in the Physical Agility Examination held at the Manchester Township High School.

This grueling test consisted of pull-ups, push-ups, sit-ups, and a 1 mile run. Those applicants who achieved a passing score advanced to the boxing component. Those applicants who completed all portions of the physical exam were invited to participate in the Written Examination phase. From there, the top scorers went before the Oral Board for extensive interviews. Those candidates considered for employment underwent a thorough background investigation and submitted to medical, psychological, and drug screenings. These Patrolmen will begin the Manchester Township Police Department’s intensive twelve week Field Training and Evaluation Program where they will be instructed and mentored by several highly trained officers.

Following the swearing in of the Patrolmen, Mayor Hudak administered Oaths to the Firefighters joining the Manchester Township Fire Department, Station 76, beginning with Danielle Curiale. A Millstone resident, Fire Fighter/EMT Curiale completed her Firefighter training in 2020 at the Monmouth County Fire Academy, and was the recipient of the Captain Fitzgerald award for Top Performer during the academy. In 2021, Fire Fighter/EMT Curiale completed her Emergency Medical Technician training. Firefighter/EMT Curiale holds a Bachelor’s degree in Psychology/Criminology from Farleigh Dickinson, where she graduated cum Laude and a Master’s degree in Forensic Psychology from John Jay College of Criminal Justice. Firefighter/EMT Curiale also serves as a volunteer firefighter for the Millstone Township Fire Department.

We wish Patrolmen Jorge and Maliff, and Firefighters Curiale and Wright success in their public safety careers serving the residents and visitors of Manchester Township.