On June 18, 2021, Patrolman Michael Terranova responded to the Rite Aid Pharmacy located in Manchester, NJ for a report of two men shoplifting over $500.00 worth of over-the-counter cough and cold medications. Patrolman Terranova was able to obtain surveillance footage of the two suspects, which was later published on our various social media pages. During his initial investigation, Patrolman Terranova learned that the same suspects were also involved in pharmacy shoplifting incidents in Toms River, New Jersey and Springfield, New Jersey.

Detective Joseph Fastige of the Manchester Township Police Department’s Investigations Bureau continued the investigation and learned that various townships in Pennsylvania and New York also had shoplifting incidents involving the same suspects.  With the assistance of Detective Jeff McGee of the Plymouth Township Police Department Pa., Detective Fastige was able to identify the suspects as Lasha Dekanoidze, 35, and Giorgi Adeishvili, 38, both of Brooklyn, New York. As a result of Detective Fastige’s investigation, Dekanoidze and Adeishvili were subsequently charged with third degree Shoplifting. 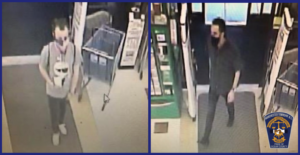 On July 26, 2021, Dekanoidze and Adeishvili turned themselves into the Manchester Township Police Department after Detective Fastige was able to make contact with them via phone.  In accordance with New Jersey Bail Reform, Dekanoidze was subsequently released on a summons and Adeishvili was transported to the Ocean County Jail pending a detention hearing.

Based on this investigation, Dekanoidze and Adeishvilli have been linked to additional unsolved shoplifting incidents throughout New Jersey. The information obtained by Detective Fastige was shared with other law enforcement agencies and will likely result in future criminal charges.

Residents are also reminded that anyone with information regarding any investigations are encouraged to contact the Manchester Township Police Department at 732-657-6111. As a reminder, anonymous tips can be submitted online at www.manchesterpolicenj.com. Tips may also be submitted through private messages on our social media pages (Facebook, Twitter, Instagram, Tik Tok).