On Thursday, July 18, 2019, at approximately 6:57 PM, officers from the Manchester Township Police Department responded to a residence on Columbine Avenue, located in the Whiting section of Manchester Township, for a report of a vehicle crash into an occupied residence.

Upon arrival, officers observed a 2014 Nissan Altima which had impacted the front of a residence with the rear of the vehicle. The investigation revealed that the Nissan, being operated by Dawn Morace, age 60 of Whiting, had been backing out from her garage prior to the crash. It was determined that while backing, the operator lost control of the vehicle which continued to accelerate until crashing through the front door and into the front porch area of a residence located across the street. The vehicle came to final rest in the living room/ kitchen area of the residence. 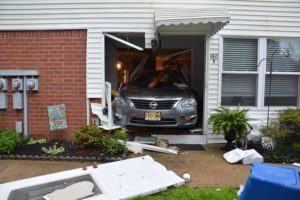 At the time of the crash, the kitchen area was occupied by resident Jean Minarik, age 71 of Whiting, and Lisa Shiner, age 52 of Yorba Linda, CA. Jean Minarik was uninjured and Lisa Shiner suffered a minor injury but refused medical attention at the scene. Morace was uninjured in the crash but was subsequently placed under arrest for suspicion of driving while intoxicated. The public and media are reminded that all defendants are innocent until proven guilty in a court of law.

Assisting at the scene were members of Quality Medical Transport, members of the Whiting Volunteer Fire Department and the Manchester Township Building Inspector. The crash is being investigated by Patrolman Kevin Rembach and Patrolman Michael O’Hara of the department’s Traffic Safety Unit.