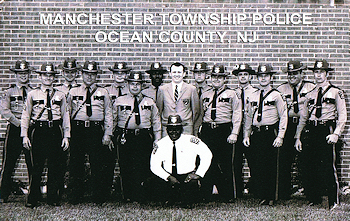 Prior to the establishment of the Manchester Police Department in 1965, the department operated with only part time special police officers patrolling the township. These part time special officers worked long hours, predominantly during the night, and without much compensation. They were not provided with mandatory training, and relied on common sense and experience gained while on patrol. Raymond Byrnes headed the small group of part time officers and oversaw their operations from an improvised headquarters, which he had established at his residence. 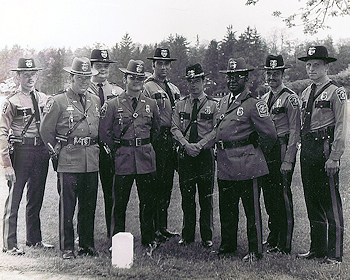 After its incorporation, the Manchester Police Department utilized supplemental patrols from the New Jersey State Police on the main roadways in the township. Radio and telephone communications were handled by the violations clerk during the day. The seven man department patrolled the nearly 83 square mile town 24 hours a day, rotating on three shifts. Officers were assigned to work nine consecutive days with rotating shifts and had three consecutive days off in between. With the incorporation of a full time police force, many changes were forthcoming under Chief Payne’s leadership.

On April 16, 1970, the Manchester Township police patch was adopted to symbolize what each officer serving the department should represent. The handshake represents the brotherhood of all mankind being treated equally; the scale represents the administration of justice and fairness to all; and the ray of light represents the strength of mind to face danger with courage.

Since the inception of the Manchester Police Department, 157 sworn police officers have served the community, including Officer Robert J. Tobias who was tragically struck and killed by a passing motorist while conducting a motor vehicle stop on May 17, 1975. Officer Tobias was 23 years of age at the time of his death, and had dedicated a year of service to the department and community.

Currently the Manchester Police Department has 72 sworn officers and 19 civilians working full time in the department. The department operates 24 hours a day 365 days a year, with a Patrol Bureau, Investigations Bureau and a Support Services Bureau. It has a full time communications center that is manned 24 hours a day, and a full time animal control officer. The Manchester Police Department takes great pride in serving the citizens of Manchester Township and looks forward to every opportunity to interact in a friendly and professional manner with the community that we proudly serve. 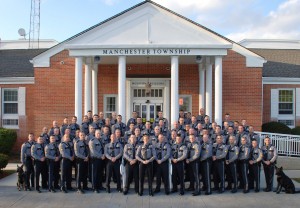