Charged With Theft for Stealing Packages from Porch

Charged With Theft for Stealing Packages from Porch

On July 13, 2021, Patrolman Keith Craig responded to a residence on Lawrence Avenue in the Pine Lake Park section of the township for a report of several Amazon packages that were stolen from a porch. It was also learned that the victim’s vehicle was keyed and damaged at some point during the incident. During Ptl. Craig’s initial investigation, he obtained Ring surveillance footage of the crime in progress and of the suspect.

Using this footage, the Manchester Police Department posted two images of the suspect to our social media pages. Shortly after making the posts, the department received information from numerous concerned citizens with regard to the identity of a potential suspect.  Upon receiving the information, Ptl. Craig continued his investigation and was able to confirm the identity of the suspect to be Asim Hines, an 18-year-old male with a last known address in Manchester, New Jersey. On July 20, 2021, Ptl. Craig lodged charges against Mr. Hines for Theft and Criminal Mischief. 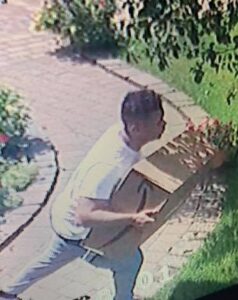 The Manchester Police Department would like to thank the members of the public for their assistance in the solving of this crime. In addition, residents are reminded that anyone with information regarding any investigations are encouraged to contact the Manchester Township Police Department at 732-657-6111. As a reminder, anonymous tips can be submitted online at www.manchesterpolicenj.com. Tips may also be submitted through private messages on our social media pages (Facebook, Twitter, Instagram, Tik Tok).