On May 4, 2022, at approximately 8:16 am, officers from the Manchester Township Police Department responded to the intersection of Manchester Blvd., and Wranglebrook Road, in the Whiting section of the township, to investigate a motor vehicle accident involving four vehicles and multiple injuries.

Upon arrival, officers observed a white 2021 Ford F450 dump truck and a white 2014 Ford E450 bus off to the northwest side of the roadway, both with extensive front end damage.  Also observed north of the intersection, was a black 2011 Ford Escape with extensive driver side damage in the northbound lane of travel, and a white 2019 Mercedes Benz A22 with passenger side damage in southbound lane of travel. 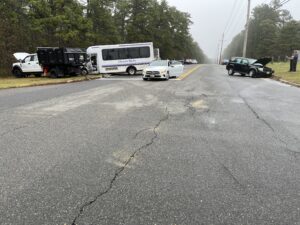 The investigation revealed that the dump truck was travelling northbound on Manchester Blvd., when it failed to observe a red traffic signal at the intersection of Wranglebrook Road and struck the Ford Escape, which was travelling west through the intersection, from Wranglebrook Road to Pleasant Valley Road.  Following impact, the Ford Escape was redirected into the northbound lane of Manchester Blvd., and the dump truck redirected towards the southbound lane of Manchester Blvd., where the E450 bus and the Mercedes were stopped at the red traffic signal.  The dump truck then struck the stopped Ocean E450 bus head on, and continued off the roadway.  Following impact, the E450 bus rotated on its rear driver side tires, causing the rear corner of the bus to strike the Mercedes.

Assisting at the scene were members of the Manchester Division of Emergency Services.  The investigation into the crash is ongoing, but at this point, failure to observe a traffic signal and careless driving are contributing factors.  This crash is being investigated by Patrolmen Jesse Hoydis and Connor Yatauro of the department’s Traffic Safety section.