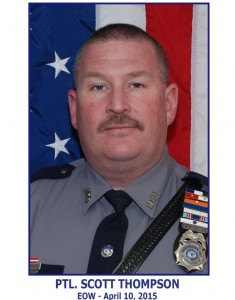 On Friday, April 10, 2015, the Manchester Township Police lost Corporal Scott R. Thompson, who passed away during his morning exercise in the police headquarters gym.

Funeral services for Officer Thompson were held at St. Luke’s Church in Toms River, with entombment following thereafter at Ocean County Memorial Park. Hundreds of mourners, including police officers, firefighters and other emergency workers from throughout New Jersey came to pay their respects and show their support for the  members of the Manchester Township Police as well as members of Officer Thompson’s family, including his wife Tracy and daughters Kelsey and Sydney. Also in attendance was Manchester Mayor Kenneth Palmer, as well as members of the Township Council.

Officer Thompson most recently was honored with a 2014 Meritorious Service Award for peacefully resolving a potentially volatile situation with an individual suffering from a mental illness. His other honors include: Exceptional Service Awards from South Toms River and Manchester, a Letter of Commendation from Lakehurst, and two Unit Citation Awards, fifteen positive performance notices, three Life Saving Awards and an Honorable Service Award from Manchester.