On Sunday, February 27, 2022 at 1:15 pm, Manchester Police Dispatch received a call of a structure fire in the area of Welles Circle in the Suncrest Village Apartment complex.  When officers arrived, they observed heavy smoke and flames emanating from apartment building #18.  Officers began an immediate evacuation of all residents from the sixteen (16) apartment units, during which time it was discovered that a person had become trapped on the second-story balcony of building #18.  This person was safely rescued by firefighter emergency services personnel.  As a precautionary measure, the residents of building #17 were also evacuated due to a heavy wind condition. Firefighters from multiple mutual aid partner jurisdictions responded and were able to extinguish the fire.  No injuries were reported at the time of the incident, however several pets perished in the fire.  The cause and origin of the fire remains under investigation by Manchester Police Detectives and the Ocean County Fire Marshal’s Office. 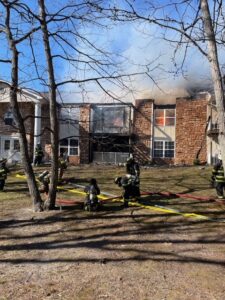