An early more blaze severely damaged a local restaurant in the Ridgeway section of the Township. Officers responding to a burglar alarm arrived to find smoke billowing from the establishment. 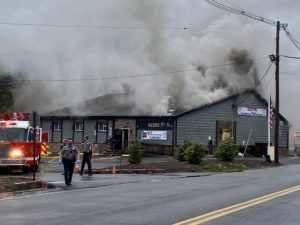 On May 1, 2020, at approximately 7:22 a.m., of   ficers from the Manchester Township Police Department responded to Alba’s Pub, located at 2313 County Road 547, for an interior motion burglar alarm. Upon arrival, officers reported seeing heavy smoke coming from the roof and eves of the building. Firefighters from Manchester, Ridgeway, Whiting, Lakehurst, Pleasant Plains, and Toms River Volunteer Fire Departments as well as firefighters from the Joint Base Fire Department responded and extinguished the fire. Alba’s sustained heavy fire, smoke, and water damage. Route 547 had to be closed down between State Highway 70 and County Road 571 while suppression and overhaul operations were conducted. 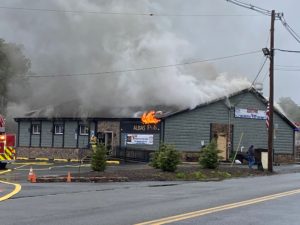 Also assisting at the scene were EMTs from the Manchester Township Division of Emergency Medical Services and police officers from the Lakehurst Police Department.

The exact cause and origin of the fire is being investigated by Detective Joseph Fastige of the police department’s Investigations Bureau with the assistance of members of the Ocean County Prosecutor’s Office, and the Ocean County Fire Marshal’s Office. 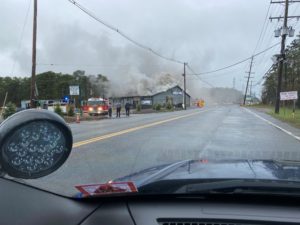