On Wednesday, July 1, 2020, at approximately 2:48 P.M. officers from the Manchester Township Police Department responded to the area of 318 Beckerville Road in the Whiting section of the Township for the report of a residential structure fire. When officers arrived on scene, they observed the house to be fully engulfed in flames. After immediately confirming that there was no one inside the residence, officers learned that that several animals were still inside. Unfortunately, these beloved pets, which included two cats, a bird, and several reptiles were not able to be rescued and perished in the fire. 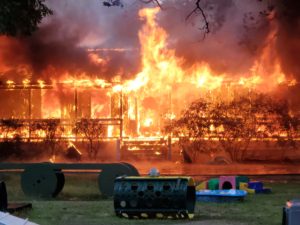 Firefighters from the Whiting, Manchester, and Ridgeway Volunteer Fire Departments as well, firefighters from nearby Lakehurst, Joint Base, Cassville, Whitesville, and Forked River Fire Departments responded to the scene and extinguished the fire. EMTs from Manchester Township Emergency Medical Services also responded. Thankfully, there were no injuries to any of the residents or first responders reported at the scene. The Red Cross assisted with providing necessary supplies for the family and they were eventually relocated with nearby acquaintances.

The cause of fire was determined to be natural in origin as it was deemed to be the result of a lightning strike on the side of the residence. The fire is being investigated by Det. Adam Emmons of the department’s Investigations Bureau with the assistance of an investigator from the Ocean County Fire Marshall’s Office. 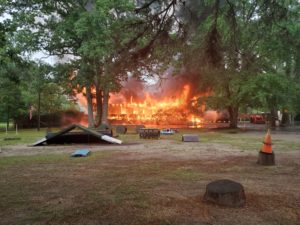