On Tuesday, November 5, 2019, at approximately 8:29 am, officers from the Manchester Township Police Department responded to the area of Route 530 and Congasia Road in the Whiting section of town to investigate a motor vehicle accident involving two vehicles and a utility trailer in the roadway. 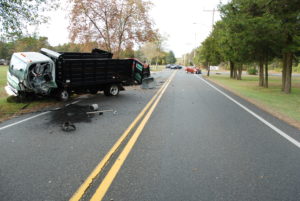 Upon arrival, officers observed an orange 2009 Kia Rio and a white 2016 Chevrolet dump truck both in the roadway with extensive damage to their front driver’s sides. Ablack 2018 utility trailer was also found in the roadway with extensive damage to its right side. The investigation revealed that the Kia was traveling west on Route 530 and crossed the centerline into the east bound lane when it collided into Chevrolet which was traveling east. The collision caused the Chevrolet to overturn onto its passenger side and the trailer in tow to be unhitched and thrown nine feet into the air where it collided with a tree.  The Chevrolet was then redirected after the trailer was unhitched and rolled back onto its upright position.