The Manchester Township Police Department is investigating two separate burglaries to the Circle K convenience store located at 2001 Ridgeway Road in the eastern section of the township. Both burglaries occurred in the early morning hours when the store was closed and both occurred within a seven day period.

On Saturday morning, August 17th, at approximately 2:15 am, officers were dispatched to Circle K convenience store located at 2001 Ridgeway Road for the report of an alarm activation stemming from the front door of the establishment. Officers arrived on scene in under one minute and found the front door unsecured. After searching the building, which yielded no suspect, officers observed the air conditioning return vent duct in the ceiling to be broken. Debris was located on the floor underneath the vent, indicating that the suspect had made entry through the ceiling. In addition, it appeared as though the safe and cash registers had been tampered with. Officers quickly established a perimeter and a K-9 was summonsed to conduct a track of the suspect. A review of the establishment’s video surveillance system revealed that a subject wearing a hooded sweatshirt, gloves and a dark backpack made entry into the store through the ceiling and shortly thereafter exited through the front door. The K-9 track led into the woods behind the store but terminated at a nearby creek. In total, approximately $500.00 in cash was taken during the first burglary. 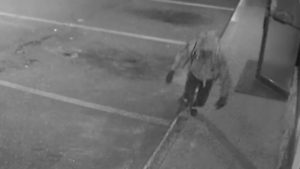 On Friday morning, August 23rd, at approximately 2:50 am, officers were once again summonsed to the Circle K for an alarm activation. As was the case with the previous activation, officers arrived very quickly. Once on scene, officers observed through the establishment’s windows an extension cord hanging from the ceiling air conditioning return duct. Being this was the point of entry from the previous burglary, officers suspected that the store may have just been burglarized. While officers once again established a perimeter, the owners of Circle K, were contacted and requested to review their video surveillance. In doing so, they advised the officers on-scene that they believed that a subject may still be inside of the store and responded to unlocked it. While waiting for the owner to arrive, a subject dressed in all black, was observed walking along a trail in the wooded area behind the store. As officers approached, the suspect fled on foot into a heavily wooded area ignoring the officers’ commands to stop. Despite an extensive search involving officers, a tracking K-9 and a drone, the suspect was not located. Once the owner arrived at the store, the building was unlocked and checked for the presence of any suspects. No one was located inside of the store and no items were determined to have been taken.

Anyone having any information regarding these incidents or the subject involved is urged to contact the Manchester Township Police Dispatch at 732-657-6111 or Detective Adam Guker at 732-657-2009, ext. 4210. Anonymous tips can be submitted online at www.manchesterpolicenj.com. Tips may also be submitted through private Facebook message. Any help from the public is greatly appreciated.