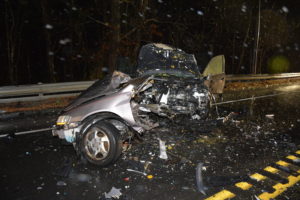 Assisting at the scene were detectives from the Ocean County Sheriff’s Office Crime Scene Investigations Unit, EMTs from Quality Medical Transport, paramedics from MONOC, firefighters from both the Ridgeway and Manchester Volunteer Fire Departments, the NJ DOT Diversion Team, and the Ocean County Medical Examiner’s Office.  The investigation into the crash is ongoing, but at this point, vehicle speed and weather conditions appear to be contributing factors.  The roadway was closed for several hours while officers conducted the investigation.  This crash is being investigated by Patrolman Michael O’Hara, Patrolman Michael Anderson, and Sergeant Antonio Ellis of the department’s Traffic Safety Unit.