More specifically, the operations were conducted in direct response to a multitude of noise and parking complaints received by Manchester Police from Manchester Township residents, living in adjoining neighborhoods (Suncrest Village, Pine Acres Manor, Summit Park, and Leisure Village West).  In conjunction with the quality of life issues created by the illegal entry of people onto the property, the site has been and continues to be a safety hazard.  Over the years the site has unfortunately been home to a number of drownings, and serious/fatal recreational vehicle related crashes. 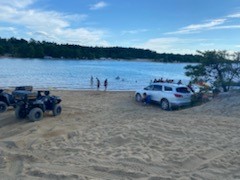 The vast majority of the complaints that were received, involved excessive noise created by loud music and motorized vehicles. These motorized vehicles include but are not limited to; dirt bikes, all- terrain vehicles, and several types of watercraft.

Originally operated by ASARCO (American Smelting and Refining Company), Incorporated the 7000 acre property was sold to and subsequently operated by Heritage Minerals until the cessation of mining operations in the early 1980’s. The vast property allows for illegal entry throughout the Manchester, Berkeley, Lakehurst and Toms River areas.

During the three day operation, officers encountered hundreds of people trespassing on the property and issued a total of 221 citations for municipal ordinance violations, criminal violations and motor vehicle related violations.  “Quality of life issues for Manchester residents and public safety have been and will remain the focus the Manchester Police Department as it continues to address the issues involving Heritage Minerals”, said Manchester Police Chief Robert Dolan. 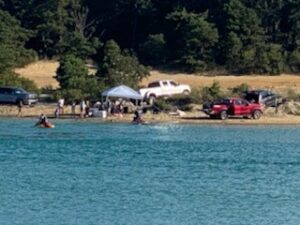 The Manchester Township Police Department would like to remind the public that the Heritage Minerals or “ASARCO” site is private property. It is closed for recreational and/or other use and it is a criminal offense to enter or remain on the property. Trespassers are subject to hefty fines and penalties up to and including incarceration for being on the property.