On Tuesday, November 22, 2022, at approximately 1210 hours, officers from the Manchester Township Police Department, responded to the area of Columbus Boulevard and Pilgrim Court for the report of a three car motor vehicle crash including a struck pedestrian. 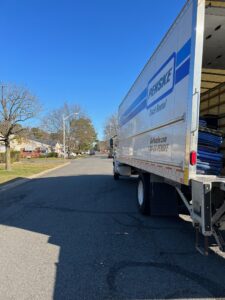 The initial investigation revealed the driver of the Lexus, identified as 84-year-old, Eleanor Finke of Manchester, NJ, was operating her vehicle east on Columbus Boulevard when she impacted the parked, unoccupied Penske Truck on the driver side. After the initial impact the Lexus continued to accelerate, impacting the parked, unoccupied Suburban on the rear driver side. After the impact with the Suburban, bystanders arrived at the crash scene in attempt to aid Mrs. Finke in controlling her vehicle. One bystander, identified as 32-year-old, John D. Dekyne 3rd, was struck in the right leg by the Lexus which continued to accelerate after the impact with the Suburban. After striking Mr. Dekyne the Lexus came to a stop.  Mr. Dekyne suffered a minor injury to his right leg and was transported via ambulance to Community Medical Center for further evaluation of his injuries. Mrs. Finke did not sustain any injuries as a result of the crash.

Assisting at the scene were EMT’s from the Manchester Township Division of Emergency Medical Services. The investigation into the crash is still ongoing, but at this point, the unsafe operation of a motor vehicle and driver inattention are the contributing factors in the crash. This crash is being investigated by Patrolman Conner Yatauro of the department’s Traffic Safety section.