On Thursday, April 7, 2022, at approximately 9:59 pm, officers from the Manchester Township Police Department responded to the intersection of State Highway 70 and Manchester Boulevard in the Whiting Section of town to investigate a two car motor vehicle accident involving a Pickup Truck and Sedan, with the occupants of the sedan still inside the vehicle.

Upon arrival, officers observed a grey, 2004, Dodge Ram Pickup with extensive front end damage facing west in the east bound travel lane of State Highway 70. Officers, also observed a gold, 2005, Honda Accord with extensive passenger side damage, on the dirt shoulder of Manchester Blvd. The investigation revealed that the Dodge Ram was traveling eastbound on State Highway 70. The Dodge Ram was approaching the intersection of State Highway 70 and Manchester Blvd with a green traffic signal. The Honda Accord was in the left turn lane of State Highway 70 west, attempting to make a left hand turn onto Manchester Blvd from State Highway 70. The Honda Accord also having a green traffic signal began to make its left hand turn onto Manchester Blvd. At this time the Dodge Ram impacted the Honda Accord on the passenger side of the vehicle. The Honda Accord then impacted a utility pole, where it came to final rest. The Dodge Ram was occupied by only the driver, who was identified as 19-year-old Justice Wilson of Whiting, NJ. Mr. Wilson did not sustain any injuries at the time of the crash. The Honda Accord was occupied by two (2) passengers. The driver of the vehicle, was identified as 82-year-old Monica McCord of Whiting, NJ. The driver of the vehicle sustained facial lacerations and chest pain and was transported to Jersey Shore University Medical Center in Neptune, NJ, and she was listed in stable condition. The passenger, identified as 83-year-old Joan Maniaci, suffered severe internal trauma, and was transported to Community Medical Center, where she was later pronounced deceased. The roadway was closed for several hours during the rescue and cleanup. 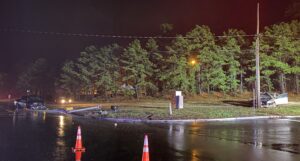 Assisting at the scene were EMTs from the Manchester Township Division of Emergency Services, Paramedics from Robert Wood Johnson University Hospital, as well as, members of the Whiting Volunteer Fire Departments, Lakehurst Police Department, and representatives from Jersey Central

Power and Light and New Jersey Department of Transportation. The investigation into the crash is still ongoing, but at this point, failure to yield to oncoming traffic is the contributing cause of the motor vehicle accident. This crash is being investigated by Patrolman Conner Yatauro of the Manchester Township Police Department Traffic Safety Section.