On Friday May 10, 2019, at approximately 8:12 am, officers from the Manchester Township Police Department responded to the intersection of Ridgeway Road and State Highway 70 to investigate a motor vehicle crash involving multiple vehicles. 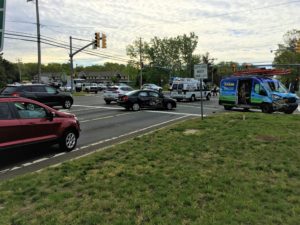 Upon arrival, officers observed three vehicles in the northwest corner of the intersection; a 2010, Toyota Corolla, a 2017, Ford Transit Van and a 2018, Ford EcoSport. Each vehicle had extensive damage. The preliminary investigation revealed that the Toyota Corolla, which was being operated by 72-year-old, Catherine Golomb of Manchester, was traveling east on Route 70 when she attempted to turn left onto Ridgeway Road northbound. While doing so, she was struck on the passenger side by the Ford Transit which was traveling west on Route 70 at the time. The van, which was being driven by 29-year-old, Fabio Oliveira of Manasquan was occupied by two other passengers, 39-year-old, Juan Cirano of Freehold and 26-year-old, Zachary Childs of Forked River. After the impact with the van, the Toyota stuck the Ford EcoSport which was stopped in the southbound lane of Ridgeway Road at the traffic signal. The EcoSport was being operated by 62-year-old Robin Miller of Bayville. The driver of the Toyota complained of chest pain and was transported by medivac helicopter to Capital Health Regional Medical Center in Trenton, where she was listed in critical but stable condition. The driver of the Ford Transit was taken to Jersey Shore University Hospital in Neptune, to be treated for the complaint of upper torso and knee pain. The other passengers in the van refused medical attention at the scene as did the operator of the EcoSport.

Assisting at the scene were firefighters from the Ridgeway Volunteer Fire Department, EMTs from Quality Medical Transport, and Paramedics from MONOC. The investigation into this crash is still ongoing. This crash is being investigated by Sergeant Antonio Ellis of the department’s Traffic Safety Unit.