Three Vehicles, Including One Towing Boat, Involved in Crash on Route 571

Three Vehicles, Including One Towing Boat, Involved in Crash on Route 571

On Saturday, May 30, 2020, at approximately 12:45 PM, officers from the Manchester Township Police Department responded to the intersection of County Route 571 and Commonwealth Boulevard, in the Ridgeway Section of the Township, to investigate a motor vehicle crash involving three vehicles including one, which was towing a boat. 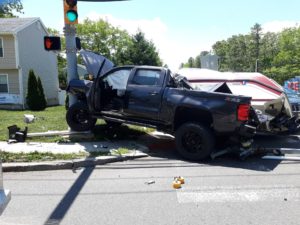 Upon arrival, officers located a grey, 2011, full-sized Chevy Silverado Pickup with heavy front-end damage facing east in the eastbound lanes of Route 571. Also located was a badly damaged black, 2015, Chevy Silverado Pickup that was partially off the roadway into a traffic signal support post. Directly next to it was a pleasure boat, which appeared to have become dislodged from the trailer that was attached to the rear of the truck.

The preliminary investigation revealed that the grey Silverado Pickup truck, which was  being operated by Douglas Smith of Toms River, was traveling westbound on Route 571 when it attempted to make a left turn onto Commonwealth Boulevard. Upon doing so, it collided with the black Silverado Pickup truck, which was being operated by Edward Liatys Jr. of Yardville NJ. Liatys was traveling eastbound on Route 571 at the time of the crash and was towing a boat. The force of the collision caused the boat to become dislodged from its trailer and strike a black, 2015, Jeep Grand Cherokee that was stopped at the traffic signal on Commonwealth Boulevard. The Jeep was being operated by David McCluskey of Manchester. Five occupants of Liatys’s truck were transported to Brick Hospital for minor injuries. 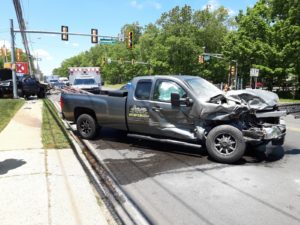 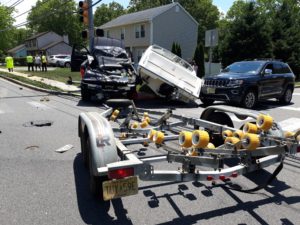 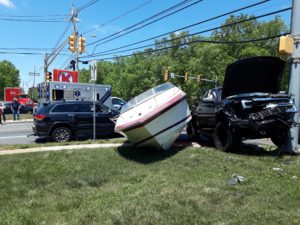 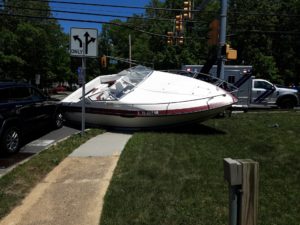 Assisting at the scene were members of the Manchester Emergency Medical Services, and the Manchester Volunteer Fire Department. The cause of the crash is ongoing and is being investigated by Ptl. George Smith of the department’s Patrol Bureau.