The Manchester Township Police Department is pleased to announce the promotion of three veteran officers to various ranks.  Lt. Robert Dolan was promoted to Captain, Dsg. Chris Hemhauser to Lieutenant, and Ptl. Chris Cerullo to Patrol Sergeant, during a ceremony which took place in the Municipal Complex, Civic Center on February 12, 2020. Mayor Kenneth T. Palmer administered their oaths of office in the presence of family, friends, police personnel and Township administrators. 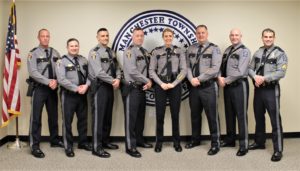 Capt. Dolan began his career with the Manchester Township Police Department in 1993 as a Dispatcher, became a Patrolman in 1994, earned the rank of Sergeant in 2004, and was promoted to Lieutenant in 2011. Among the departmental projects he managed were the construction of a $6 million township-wide radio system and the implementation of the Spillman Computer Aided Dispatch and Record Management System. Capt. Dolan’s current assignment is the development and implementation of the Division of EMS which encompasses Emergency Medical Services and Fire. The program is scheduled to launch on March 1, 2020. Capt. Dolan holds a Bachelor’s Degree in Business Management from Rutgers University, a Master’s Degree in Administrative Science from Fairleigh Dickinson University, is a Qualified Purchasing Agent, and is a NJ Certified Public Manager.  In addition, Capt. Dolan has earned numerous law enforcement related awards and commendations throughout his distinguished career. 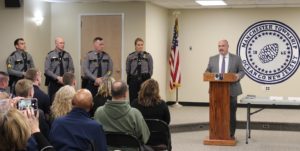 Lt. Hemhauser began his career with the Manchester Township Police Department in 1996 as a Dispatcher and took his oath as a Patrolman in 2001. He served as a Field Training Officer, dedicated a combined seven years to the Manchester and Ocean County Regional SWAT teams, and was assigned to the Investigations Bureau in 2006. After nine years as a Detective, he was promoted to Detective Sergeant in 2015. Lt. Hemhauser, holds a Bachelor’s Degree from Stockton University, and a Master’s Degree from Farleigh Dickinson University. In addition, Lt. Hemhauser is a member of the Ocean County Prosecutor’s Office Arson Task Force, a member of the Manchester Police Honor Guard and has also earned numerous law enforcement related awards and commendations throughout his distinguished career.

Sgt. Cerullo was hired as a Manchester Police Patrolman in 2007, and holds a Bachelor’s degree in Sociology from the University of Maryland Baltimore County, and a Master’s degree in Human Resource Management from Seton Hall University.  Over the course of his career, Sgt. Cerullo has actively worked with the School District, serving as the School Resource Officer for the past four years. Along with a select group of officers, he was instrumental in the development of the #NotEvenOnce high school opiate awareness program for which he serves as an instructor. He created the curriculum for the Manchester Youth Police Academy, a successful summer day camp program launched in 2015. Sgt. Cerullo also serves on the department’s school safety and security assessment committee. 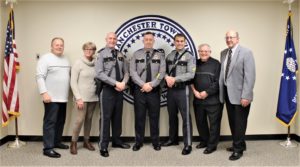 “This proud day would not be possible without the continued support of Mayor Palmer and the Township Council. They recognized the need for a township-administered EMS Division, and these promotions are a part of the reconfiguration of our Police Department to make that happen,” said Chief Parker. “We wish Capt. Dolan, Lt. Hemhauser, and Sgt. Cerullo the best of luck as they begin the next chapters in their law enforcement careers here in Manchester Township.”