On Wednesday, July 31, 2019, at approximately 11:32 am, members of the Manchester Township Police responded to the area of Route 70 and Route 539 for the report of a head on collision with injuries, in the Whiting section of the township. Upon arrival, officers located a 2009 Buick Lucerne and a 2015 Tesla Model S both with heavy frontal damage and airbag deployment within the intersection. 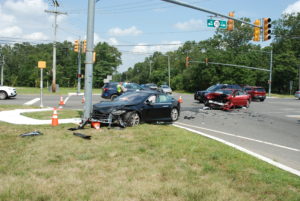 Preliminary investigation revealed that the Buick was traveling north on Route 539 when it failed to yield the right of way to the Tesla, which was traveling south on Route 539, and making a left turn onto Route 70 west, causing both vehicles to collide. After the collision, the Tesla was redirected and impacted a curb and the traffic signal support before coming to final rest.

The driver of the Buick, 78 year old Kathleen Falcon of Whiting, and her passenger, 96 year old Candido Falcon of Whiting, were both wearing their seatbelts and were transported to Community Medical Center in Toms River for the treatment of minor injuries. The driver of the Tesla, 34 year old Carl Pachmayer of Phoenixville, PA, was also wearing his seatbelt and sustained minor injuries but refused any further medical treatment. Traffic was diverted for several hours as emergency crews were rendering aid to the victims and for the investigation.