Two Vehicles Collide on Route 37; One Driver Extricated and Airlifted to Trauma Center

Two Vehicles Collide on Route 37; One Driver Extricated and Airlifted to Trauma Center

On Tuesday, August 17, 2021, at approximately 7:45 am, officers from the Manchester Township Police Department responded to the area of State Highway 37 and Bone Hill Road to investigate a motor vehicle crash involving two motor vehicles that collided at the intersection.

Upon arrival, officers observed a blue, 2008, Saturn Vue with extensive front end damage in the eastbound lanes of travel facing westbound and a red, 2007 Acura RDX with extensive driver side damage on Buckingham Drive in the southbound lane facing northbound.  The investigation revealed that the Saturn was traveling Eastbound on State Highway 37 when it collided with the Acura, which was turning left at the intersection, from Bone Hill Road onto State Highway 37 Westbound. 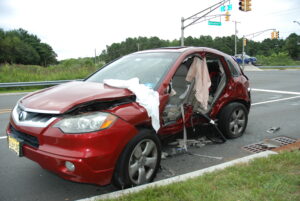