On Tuesday, January 28, 2020, at approximately 4:34 pm, officers from the Manchester Township Police Department responded to the intersection of Commonwealth Boulevard and Northampton Boulevard in the Pine Lake Park section of the township to investigate a motor vehicle accident involving two vehicles with entrapment. 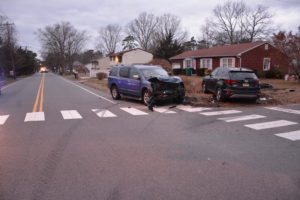 The front seat passenger of the Hyundai, identified as 92-year-old, Loretta Sueiro of Manchester, was entrapped in the vehicle due to the damage and was thrown to the floor because she was not wearing her seatbelt. As a result, she had to be extricated by firefighters from the Manchester and Ridgeway Volunteer Fire Departments. After being removed from the vehicle, Sueiro was transported to Jersey Shore University Medical Center via medivac helicopter for treatment and evaluation of her injuries. She was reportedly admitted into the Intensive Care Unit with non-life-threatening injuries. The driver of the vehicle, 66-year-old, Barbara Duffield of Manchester, sustained non-life-threatening injuries and was transported to Community Medical Center for treatment and evaluation.

The intersection was closed and traffic was diverted for several hours following the crash. Assisting at the scene were members of the Manchester and Ridgeway Volunteer Fire Departments, as well as medical personnel from Holiday City EMS, Quality Medical Transport, MONOC, Toms River EMS, and Hackensack Air # 2. The investigation into the crash is still ongoing, but at this point, driver error appears to be a contributing factor. This crash is being investigated by Ptl. Jesse Hoydis of the department’s Traffic Safety Unit.