On Tuesday July 9, 2019 at approximately 12:58 PM, officers from the Manchester Township Police Department responded to a residence on Mallard Street in the Cedar Glen West section of the Township for the report of a vehicle which had struck the front of a residence. 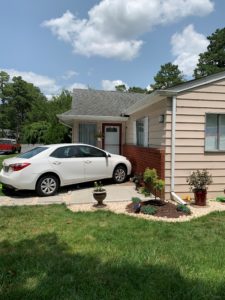 Upon arrival, officers observed a 2014, Toyota Corolla resting against the brick façade of the single family residence. The initial investigation revealed that the operator of the Toyota, identified as 81-year-old, Maria Piwowarczyk, of Manchester, was attempting to pull into a shared driveway, when she drove across the adjacent neighbor’s lawn before striking the front of the residence. Piwowarczyk initially stated that her brakes had failed, which caused her to lose control of the vehicle, however, an inspection of the vehicle revealed that the brakes appeared to be in proper working condition.

Piwowarczyk was not injured during the crash but was evaluated as a precaution at the scene by members of the Manchester Volunteer First Aid Squad. She refused any additional medical treatment. Assisting on scene was a representative from the Manchester Township Building Inspector’s Office.