On Monday, September 19, 2022, at approximately 9:53 pm, officers from the Manchester Township Police Department responded to a Milford Avenue address in Whiting for a report that a vehicle had crashed into a residence.

Upon arrival, officers observed a 2003 Mercury Grand Marquis that had impacted the front of a residence with the rear end of the vehicle.  The investigation revealed that the Mercury, which was being operated by 64 year old Clyde Jackson of Whiting, was backing out of his Milford Avenue driveway when he lost control of his vehicle.  The vehicle continued across Milford Avenue, coming to final rest after colliding with the front wall and into the living room of the residence across the street.  At the time of the crash, the living room was occupied by 57 year old, Gloria Eppig of Dallas, TX.  Eppig, who was transported to Community Medical Center for treatment and evaluation of non-life-threatening injuries.  Jackson was not injured as a result of the crash. 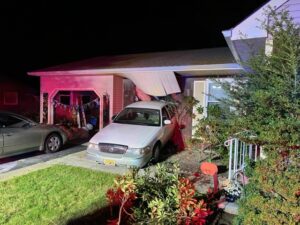 Assisting at the scene were members of Manchester Township Emergency Medical Services, Whiting Volunteer Fire Department, Joint Base Fire Department, the Ocean County Technical Rescue Team, the Manchester Township Building Inspector, and Accurate Towing.  The investigation into this crash is still ongoing, but at this point driver error appears to be the contributing factor.  The crash is being investigated by Patrolman Vincent Derome and Patrolman Jesse Hoydis of the department’s Traffic Safety Section.