The Manchester Township Police Department is pleased to welcome two Patrolmen, brothers Jonathan Meaney and Julian Meaney, who were sworn in by Mayor Kenneth T. Palmer on September 14, 2020, in front of family and police personnel. 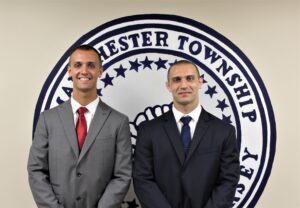 Julian Meaney, 30, graduated from Manchester Township High School in 2009 and completed his Bachelor’s degree in Biology from Elizabethtown College in 2014. An accomplished wrestler, Julian founded the Youth Wrestling Club for Manchester Township and coached varsity wrestling alongside his brother. Julian previously served as a corrections officer with the Garden State Youth Correctional Facility. Julian has been involved with the Manchester community, working with the Harry Wright Summer camp for 15 years.

“It is a rare and special event when two brothers, both highly qualified and recommended, find themselves hired by a law enforcement agency at the same time,” said Chief Lisa Parker. “Officers Jonathan and Julian Meaney scored within one point of each other during our most recent hiring process, putting them next in line to join our ranks. Given their impressive resumes, which include years of service to Manchester Township beginning at a young age, I’m proud to welcome them to our department.”

The swearing in ceremony was led by Chief Parker, who explained that the intensive Manchester Township Police Department hiring process began in June of 2019, when approximately 125 individuals submitted their applications for employment. For the first phase, applicants participated in the Physical Agility Examination held at Manchester Township High School. This grueling test consisted of pull-ups, push-ups, sit-ups, and a 1 mile run. Those applicants who achieved a passing score advanced to the boxing component.

The approximately 70 applicants who completed all portions of the physical exam were invited to participate in the Written Examination phase. From there, the top scorers went before the Oral Board for extensive interviews. Those candidates considered for employment underwent a thorough background investigation and submitted to medical, psychological, and drug screenings.

“Only those individuals who are truly dedicated to excelling in the law enforcement profession and can meet the high standards of our pre-employment testing are considered to join the ranks of the Manchester Township Police Department,” said Chief Parker.

Officers Jonathan and Julian Meaney will enter the Ocean County Police Academy on September 18, 2020. Following the academy, they will begin the Manchester Township Police Department’s intensive twelve week Field Training and Evaluation Program where they will be instructed and mentored by several highly trained officers. We wish them success in their law enforcement careers serving Manchester Township and its residents.