On Sunday, August 30, 2020, at approximately 8:34 a.m., officers from the Manchester Township Police Department responded to the area of County Route 530 and Schoolhouse Road in the Whiting section of the township for a report of a motorcycle crash with CPR in progress.

Upon arrival, officers observed a blue, 2020, Wolf Islander scooter on its side, partially on the sidewalk and roadway on the eastbound side of CR 530. The investigation revealed that the scooter was travelling southbound on Schoolhouse Road in the left turn lane. The scooter then began making a left turn on to CR 530 eastbound, when it struck the curb. The collision caused the driver to be ejected from the scooter, onto the sidewalk before striking a traffic sign and rolling down a grassy embankment towards the Walgreens parking lot, located at 500 CR 530. 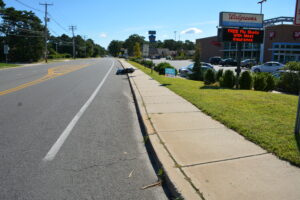 Prior to police arrival, several good Samaritans, including an off-duty nurse, an off-duty police officer, a retired police officer, two off-duty EMTs, along with other concerned citizens rushed to aid of the motorcyclist who was reportedly unconscious and not breathing.

The investigation into this crash is ongoing, but at this point, driver error and speed appear to be contributing factors. This crash is being investigated by Ptl. Jesse Hoydis of the Manchester Township Police Traffic Safety Unit.