On Sunday, August 30, 2020, at approximately 1:32 pm, officers from the Manchester Township Police Department responded to State Highway 70 in the area of Mile Marker 37 in the Whiting section of the township, to investigate a three vehicle crash, one which had overturned with multiple reported injuries.

Upon arrival, officers observed a white 2006 Volvo S40 in the shoulder of the eastbound lane with heavy front driver side damage.  A silver 2013 Hyundai Genesis with heavy driver side damage and a black 2008 Chrysler PT Cruiser were located in the brush off the westbound side of the road.  The Chrysler had overturned on its driver side and sustained heavy damage to the entire vehicle.

The investigation revealed that the Volvo was travelling east on SH 70 when it crossed the centerline and entered the westbound lane.  The Volvo subsequently struck the Chrysler head on, causing the Chrysler to travel off the roadway and overturn.  The Volvo then continued forward, striking the Hyundai in the driver side of the vehicle, causing the Hyundai to spin off the roadway. 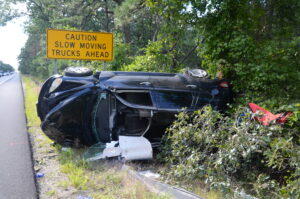 The driver of the Volvo, 57 year old Samuel J. Anderson of Toms River, was transported to Jersey Shore University Medical Center for treatment and evaluation of non-life threatening injuries.  He was found to be in possession of CDS and suspected to be driving while under the influence.  Additionally, it was determined that he had not been wearing his seatbelt at the time of the crash.

The driver of the Chrysler, 46 year old Christopher J. Monroe of Manchester, was transported via medevac helicopter to JSUMC for treatment and evaluation of non- life threatening injuries.  The Hyundai was occupied by the driver, 69 year old Judith F. Barnett, and the front seat passenger, 60 year old Cydney K. Savage, both of Camden.  Savage was transported to Deborah Heart and Lung Center for treatment and evaluation of non-life threatening injuries.  All three were determined to be wearing their seatbelts at the time of the crash.

Assisting at the scene were members of the Ocean County Prosecutor’s Office, the Ocean County Sheriff’s Department Crime Scene Investigation (CSI) Unit, Whiting Volunteer Fire Department, and Manchester First Aid Squad.  The investigation into the crash is ongoing, but at this point, driver impairment appears to be the primary cause of the crash.  This crash is being investigated by Ptl. Jesse Hoydis and Ptl. Michael Anderson of the department’s Traffic Safety Unit.