On Wednesday, July 8, 2020, at approximately 4:51 p.m., officers from the Manchester Township Police Department responded to the intersection of Commonwealth Boulevard and Bismarck Street in the Pine Lake Park section of town to investigate a three-car motor vehicle crash involving a struck utility pole, and an overturned vehicle with entrapment.

Upon arrival, officers observed a white, 2010 Lincoln MKZ with extensive front-end damage and a cracked utility pole on the front lawn of a residence at the intersection.  On Bismarck Street, near Eleventh Avenue, officers observed a severely damaged silver, 2017 Nissan Sentra on its driver side. Also located was a gray, 2015 Toyota Corolla with front-end damage. The Corolla was unoccupied and was parked along Bismarck Street. 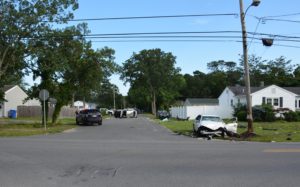 The initial investigation revealed that the Lincoln MKZ was travelling south on Bismarck Street, when the operator, identified as a 17-year-old male from Manchester, failed to come to a stop at the stop sign and continued into the intersection of Commonwealth Boulevard. Upon doing so, the Lincoln collided with the passenger side of the Nissan, which was traveling west on Commonwealth Boulevard. The force of the collision caused the Nissan to overturn and roll down Bismarck Street and sent the Lincoln across the intersection into a utility pole. While rolling down Bismarck Street, the Nissan struck a speed limit sign, propelling its base through the windshield of the parked, unoccupied Toyota.  The Nissan came to its final rest on its driver side on Bismarck Street, approximately 200 feet from the initial point of impact after rolling approximately three times.

Both the driver of the Lincoln, and his 17-year-old passenger, sustained abrasions and lacerations to their faces and arms, while the driver of the Nissan, identified as 42-year-old Jocelyn Isaza of Toms River, sustained a concussion along with fractured hands and fingers. All parties were determined to be wearing their seatbelts and were subsequently transported to Jersey Shore University Medical Center via ambulance.

Assisting at the scene were members of the Ridgeway and Manchester Volunteer Fire Departments as well as EMTs from the Manchester Township Division of Emergency Services. Also assisting were representatives from Jersey Center Power & Light, and Priced Rite Towing.  The roadway was closed for several hours during the investigation and cleanup.  The investigation is still ongoing, but at this point, driver error and inexperience appear to be the primary cause of the crash.  This crash is being investigated by Patrolman Jesse Hoydis of the department’s Traffic Safety Unit.