Upon arrival, officers observed an unoccupied blue, Yamaha quad style ATV sitting in the middle of the trail. The male operator had been ejected from the vehicle. The male was semiconscious and had significant head trauma and what appeared to be multiple broken bones. The initial investigation revealed that the Yamaha ATV was traveling west along the south side of the lake when a larger “side-by-side” style ATV struck it head-on. Witnesses stated the larger ATV emerged from a nearby smaller trail in an easterly direction and collided with the Yamaha quad head on. The unknown “side by side” ATV then fled the scene in an unknown direction. Further on-scene investigation revealed a possible identification of the suspect ATV as a 2019, Polaris RZR, believed to be white in color. The male victim was identified as 28-year-old, John Guzman of Queens, NY. Guzman was transported by a Hackensack Meridian Health medevac to Jersey Shore University Medical Center in Neptune where he is currently listed in critical but stable condition.

Assisting at the scene were firefighters from the Manchester, Ridgeway and Whiting Volunteer Fire Departments, EMTs from the Manchester Township Division of Emergency Services and paramedics from Robert Wood Johnson. The assistance of the fire personnel was instrumental as they were able to utilize their off road vehicles to transport EMTs and paramedics to the scene to render aid to the victim. The preliminary investigation revealed that Guzman was not wearing any safety equipment at the time of the crash, which may have increased the severity of his injuries. 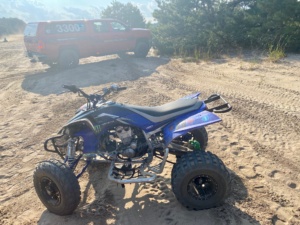 The follow-up investigation was conducted by Ptl. Michael Anderson of the department’s Traffic Safety Section, along with Det. Danny Barker of the agency’s Investigations Bureau. During the investigation, physical evidence connecting a 2019, Polaris RZR side-by-side style ATV to the incident was located at the scene. This evidence was consistent with the statements provided by eye witnesses. During subsequent interviews, investigators identified the vehicle’s operator as well as the possible location of the suspect ATV. At the completion of the investigation, the suspect, identified as, 31-year-old Brett Durant of Scotch Plains, was charged criminally for Knowingly Leaving the Scene of a Motor Vehicle Accident Resulting in Serious Bodily Injury which is a 3rd degree crime. Durant was taken into custody without incident. He was processed and released on a summons pending a first court appearance. Durant’s Polaris RZR ATV, which had been hidden in a remote wooded location on the property several miles from the scene of the crash was recovered and seized pending forfeiture.