On Thursday, August 13, 2020 at approximately 2:54 PM, officers from the Manchester Township Police Department responded to Route 70 at the intersection of Manchester Boulevard to investigate a head-on crash involving two vehicles. 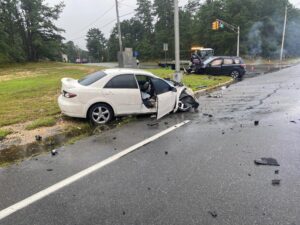 Upon arrival, officers observed a white Mazda 6 and a blue Subaru Forester disabled in the roadway, both with extensive front-end damage. The investigation revealed that the Mazda was traveling westbound on Route 70 when it began its left turn on to Manchester Boulevard, crossing the eastbound lane of travel. The vehicle failed to yield to oncoming traffic and was subsequently struck head on by the Subaru which was traveling eastbound on Route 70. The Mazda was being operated by, 64-year-old Diane, Sottilaro of Whiting. Sottilaro suffered multiple non-life threatening injuries and was transported to Community Medical Center by ambulance. The Subaru was being operated by, 47-year-old, Joseph Henderson of Manchester. Henderson suffered a small laceration to his left arm in the crash and was also transported to Community Medical Center by ambulance. 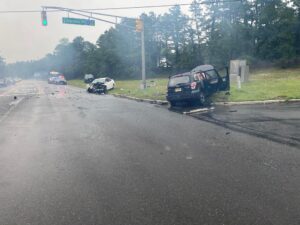 Assisting at the scene were EMTs from the Manchester Township Division of Emergency Service and paramedics from Robert Wood Johnson University Hospital. The crash is currently under investigation by Ptl. Michael Anderson of the police department’s Traffic Safety Unit. The preliminary investigation reveals that driver error and rainy weather were the main contributing factors to the crash. Additionally, it was determined that both vehicles did not have their headlights on. Under New Jersey Motor Vehicle law, it is mandatory that headlights be activated anytime windshield wipers are in use. Both operators were seat belted at the time of the crash.