On May 1, 2022, at approximately 5:36 p.m., members of the Manchester Township Police Department responded to Pasadena Road near the intersection of Mount Misery Road, in the Whiting Section of the township, to investigate a motor vehicle crash involving a single motorcycle.

Upon arrival, officers observed a red 2018 Harley Davidson Road Glide Motorcycle laying on its side in the westbound shoulder of the roadway. The motorcycle was being operated by Frederick Fritz, 55, of Manchester and Phyllis Fritz, 53, also of Manchester occupied the passenger seat of the motorcycle prior to the crash. 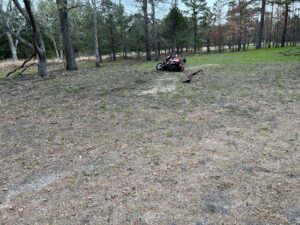 The investigation revealed that Mr. Fritz was traveling eastbound on Pasadena Road when a deer suddenly entered the roadway, striking the motorcycle on its left side. The impact resulted in both occupants being ejected from the motorcycle. The motorcycle continued forward down the roadway before coming to final rest in the dirt shoulder of the westbound side of the roadway. Frederick and Phyllis were subsequently transported via ambulance to Jersey Shore University Medical Center for treatment.

Assisting at the scene were the Whiting Fire Department and Manchester Township EMS. The cause of the crash was determined to be a deer crossing the roadway in such a manner that did not allow for Mr. Fritz to react or attempt any evasive maneuvers prior to being impacted. The crash is currently being investigated by Ptl. Anderson of the Manchester Township Police Department’s Traffic Safety Section.