On Saturday, January 30th, at approximately 11:10 am, officers from the Manchester Township Police Department responded to the area of State Highway 70 and Hilltop Road, in the Whiting Section of the township, to investigate a motor vehicle crash involving a motorcycle.

Upon arrival, officers observed a blue, 2016, Harley-Davidson FLH facing eastbound in the westbound lane of Route 70. The motorcycle was lying on its left side. The rider, identified as 68-year-old, Deborah D. Shannon of Edison, was lying on the pavement in the westbound lane of travel quite a distance from the motorcycle. Shannon, who was wearing a DOT approved helmet and leather gear, was alert and conscious but had obvious signs of injuries to her head, left eye, and left leg. As a result, she was transported, via medevac helicopter, to Jersey Shore University Medical Center in Neptune for treatment and evaluation of apparent non-life-threatening injuries. The apparent deer she struck was located deceased on the westbound shoulder. 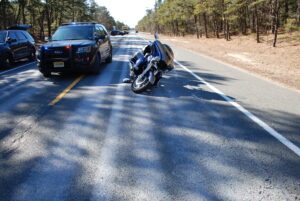 Route 70, in the area of the collision, was closed in both directions briefly while officers conducted the investigation. Assisting at the scene were EMTs from the Manchester Township Division of Emergency Services, as well as paramedics from Robert Wood Johnson University Hospital. Also assisting were members of both the Whiting and Ridgeway Volunteer Fire Departments. This crash is being investigated by Patrolman Michael O’Hara of the department’s Traffic Safety Unit. The Manchester Township Police Department would like to remind all motorcyclists to always wear DOT approved helmets and equipment while riding. 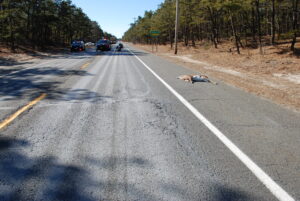