An exhaustive nine hour search for a missing, endangered 78 year old male ended successfully when he was located by an off-duty Manchester Police Officer in the 251 acre Crossley Preserve site.

On Friday, November 27th at approximately 8:04 pm, the Manchester Police Department received information from Heidi Sarno, regarding her missing 78 year old father, Fred Rapp, who she had last seen in Lacey Township at approximately 4:30 pm that day.  Mrs. Sarno provided information such as the vehicle her father had been driving, cell phone number/carrier and information regarding his current medical/cognitive condition.  In response, the Manchester Police Department took a missing person’s report and initiated an investigation. 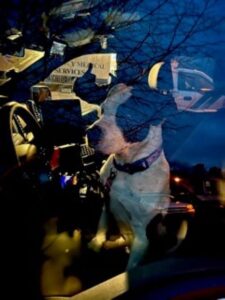 During the investigation, on-going cell phone GPS information was utilized to track Mr. Rapp’s location which continued to change. The areas that were identified were the wooded areas along State Highway 37, spanning the Toms River and Berkeley Township areas. More specifically, these areas were the ASARCO and Crossley Preserve land sites. Manchester Police searched the wooded areas with the department’s Humvee, drone, and its newly acquired all- terrain vehicle with negative results for locating Mr. Rapp or his vehicle.

While the search was being conducted, multiple unsuccessful attempts were made throughout the evening and early morning hours by police dispatch and Sgt. Theodore Cooke to contact with Mr. Rapp on his cell phone.  Finally, at approximately 5:45 a.m., Mr. Rapp answered a call made to him by Sgt. Cooke.  Mr. Rapp advised Sgt. Cooke that he had crashed his vehicle in a wooded area, and did not know his location.  Moments later, Mr. Rapp told Sgt. Cooke that someone was with him. Mr. Rapp subsequently handed his phone to the person who, to Sgt. Cooke’s surprise was off-duty Manchester Sergeant Charles Brooks who had been hunting in the area at the time.  Sgt. Brooks provided information to police dispatch as to their location, which was inaccessible to motor vehicles.  Sgt. Brooks then escorted Mr. Rapp to an open area where he was transported by police vehicle to Bone Hill Road where he was treated by Manchester First Aid.  Mr. Rapp was later transported to Community Medical Center for evaluation and treatment.

It was later learned that Sgt. Brooks was hunting in the area when he observed a dog, later determined to be Mr. Rapp’s dog, Petie alone on a nearby trail. Sgt. Brooks assumed the dog had wandered from its owner and decided to attempt to reunite the dog with its owner.  With that, Sgt. Brooks followed the dog’s paw prints and nearby foot wear impressions for several hundred yards, ultimately leading him to Mr. Rapp.  “This situation highlights the fact that a police officer is a police officer 24/7.  We are truly fortunate that Sgt. Brooks was in the right place at the right time because without his help there is no telling how this story would have ended”, said Manchester Police Chief Lisa Parker.