The Manchester Township Police Department is pleased to welcome Ptl. Lillian Barber, who was sworn in by Mayor Kenneth T. Palmer during a small ceremony on December 2, 2020, in front of a limited group of family and police personnel. 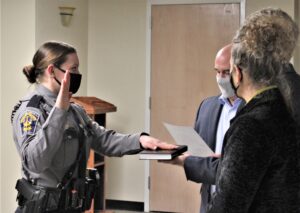 Ptl. Barber is a 22 year old resident of Mount Holly who was born in Boston, Massachusetts, and previously lived in Great Falls, Virginia. A 2015 graduate of Langley High School, Ptl. Barber went on to complete a Bachelor’s Degree of Science in Sociology, majoring in Criminology. She received high academic honors while participating in several programs and clubs including the Gamma Phi Beta Sorority and the Virginia Tech Student Police Academy. After moving to New Jersey, Ptl. Barber attended the Ocean County Police Academy, where she quickly established herself as a class leader. She held a 100 percent average in academics and excelled in physical fitness, finishing in the top half of her class. 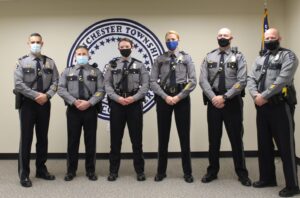 The intensive Manchester Township Police Department hiring process began in June of 2019, when approximately 125 individuals submitted their applications for employment. For the first phase, applicants participated in the Physical Agility Examination held at Manchester Township High School. This grueling test consisted of pull-ups, push-ups, sit-ups, and a 1 mile run. Those applicants who achieved a passing score advanced to the boxing component. The approximately 70 applicants who completed all portions of the physical exam were invited to participate in the Written Examination phase. From there, the top scorers went before the Oral Board for extensive interviews. Those candidates considered for employment underwent a thorough background investigation and submitted to medical, psychological, and drug screenings.