The Manchester Township Police Department is pleased to announce the promotion of two officers, Sgt. Albert Vega to Lieutenant and Ptl. Ian Bole to Sergeant, and the hiring of two recruits, Ptl. Brendan Brush and Special Law Enforcement Officer Class II Sage Sysol. Mayor Kenneth T. Palmer administered their oaths of office on January 4, 2021, during a closed ceremony due to COVID-19 precautions. 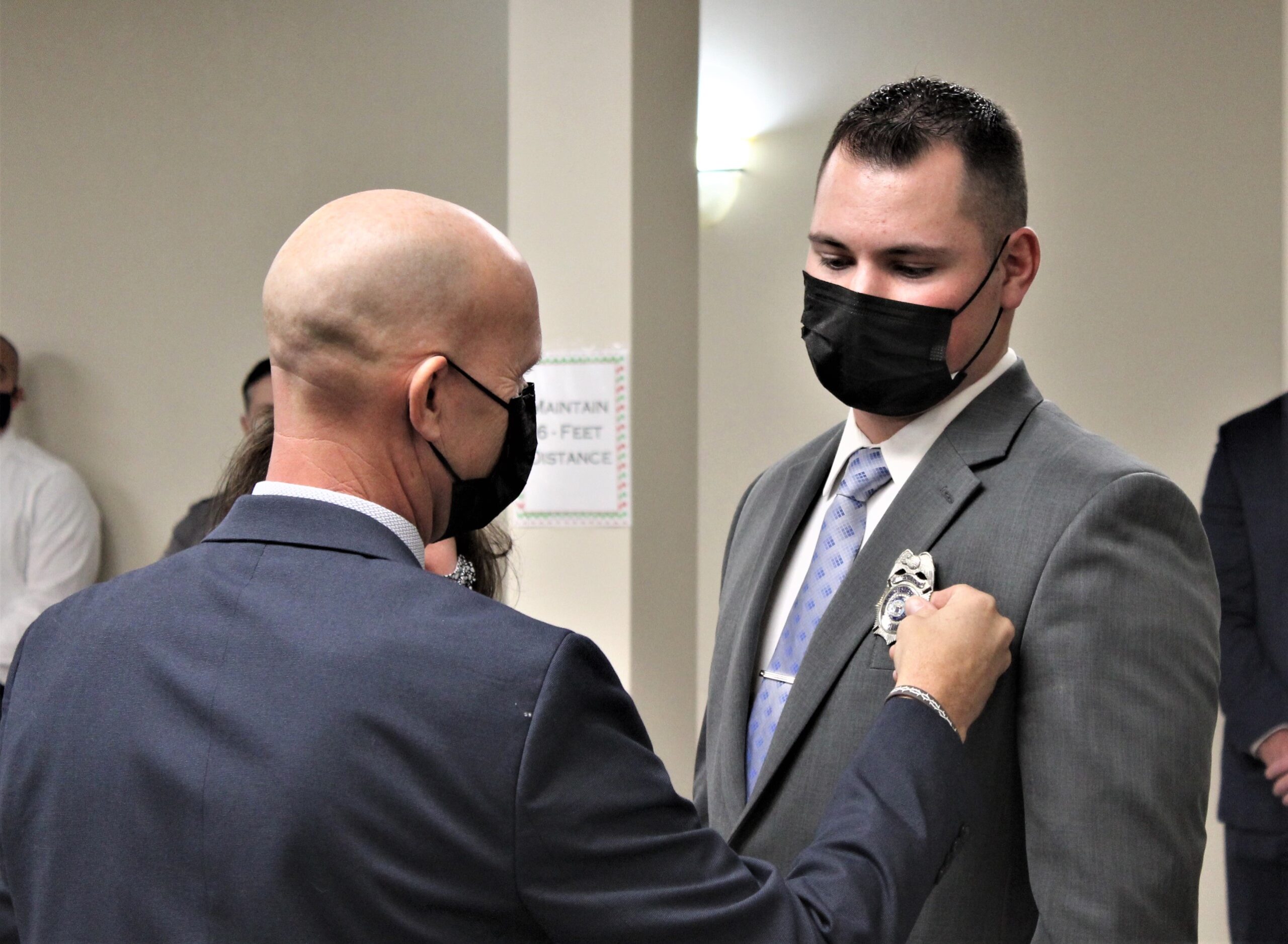 ◄ Back
Next ►
Picture 1 of 4
Lt. Vega joined the Manchester Township Police Department in 2003 and previously served in the Investigations Bureau as a Detective and later Detective Sergeant, leading the Narcotics Enforcement Team. Lt. Vega, who holds a master’s degree from Fairleigh Dickinson University, was a member of the Ocean County Regional SWAT team and serves as an instructor in numerous law enforcement disciplines. He was presented with the Chief’s Achievement Award in 2018.
A former member of the Traffic Safety Section, Sgt. Bole began his career with the Manchester Township Police Department in 2007. Sgt. Bole earned his Master’s Degree from Fairleigh Dickinson University and has extensive training and experience in traffic safety matters, as well as serving as an Ocean County Police Academy Instructor. He received the Chief’s Recognition Award in 2014 and 2016.
Ptl. Brush is a Toms River resident and High School East graduate who previously worked as a Class I Officer in Point Pleasant Beach. He earned an Associate’s Degree from Ocean County College and is currently pursuing his Bachelor’s Degree at Kean-Ocean University. Ptl. Brush also completed an internship with the Ocean County Prosecutor’s Office Major Crime Unit.
SLEO II Sysol lives in Little Egg Harbor and graduated from Pinelands Regional High School in 2015. He earned an Associate’s Degree from Ocean County College and is working toward his Bachelor’s Degree at Stockton University. A former Class I Officer in Seaside Heights, SLEO II Sysol completed his Class II training in 2019.
“There is no question that Lt. Vega and Sgt. Bole are dedicated, resourceful and decorated officers who will continue their exemplary service to our residents in their new leadership roles,” said Chief Lisa Parker.
“We’re also pleased to welcome Ptl. Brush and SLEO II Sysol, who have proven that they have what it takes to become successful law enforcement officers. I’d like to thank Mayor Palmer and the Township Council for their continued support of our Police Department.”
Officers Brush and Sysol will begin an intensive twelve week Field Training and Evaluation Program, during which time they will be instructed and mentored by several highly trained and seasoned officers. Upon successful completion of the FTO Program, these officers will be assigned to a patrol squad.
The intensive Manchester Township Police Department hiring process began in June of 2019, when approximately 125 individuals submitted their applications for employment. For the first phase, applicants participated in the Physical Agility Examination held at Manchester Township High School. This grueling test consisted of pull-ups, push-ups, sit-ups, and a 1 mile run. Those applicants who achieved a passing score advanced to the boxing component. The approximately 70 applicants who completed all portions of the physical exam were invited to participate in the Written Examination phase. From there, the top scorers went before the Oral Board for extensive interviews. Those candidates considered for employment underwent a thorough background investigation and submitted to medical, psychological, and drug screenings.
“We wish Lt. Vega, Sgt. Bole, Ptl. Brush, and SLEO II Sysol the best of luck as they begin the next chapters in their law enforcement careers here in Manchester Township,” said Chief Parker.
By MPD|2021-01-22T18:22:56-05:00January 5th, 2021|Manchester Police News|Comments Off on Officers Promoted, New Hires Welcomed