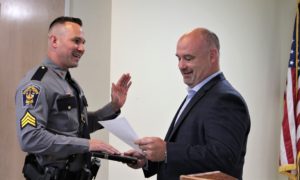 Sgt. Gatnarek was hired in 2004 having previously worked as a Class I and II officer for Seaside Heights. He completed the Ocean County Police Academy in 2004 and is in the process of completing his degree in Criminal Justice from Stockton University. Following a successful career in Patrol, Sgt. Gatnarek was selected to serve in the Investigations Bureau in October 2018. He currently serves as a Field Training Officer; Youth Academy Instructor; In-Service Instructor of numerous disciplines including Firearms and Use of Force; and is Team Leader with the Ocean County Regional SWAT Team. Sgt. Gatnarek co-founded the Manchester Township Elite Law Enforcement Fitness Challenge, a competition at Harry Wright Lake that has raised thousands of dollars for local charities. Among his award recognitions are multiple unit citations, two Meritorious Service Awards, the Combat Cross Award, and two State PBA Unit Citation Awards.

“Attaining the rank of Sergeant takes an incredible amount of dedication and sacrifice, not only for the officer undergoing this rigorous testing process, but also their family,” said Chief Lisa Parker, who noted that countless hours of intense study are required to successfully complete the written and oral portions of the Sergeant’s exam.

A lifelong resident of Manchester Township, Ptl. Rembach was hired as a SLEO II in January of 2019, and excelled in that role as a quick learner who exhibited all of the attributes required to be a successful officer both during and after his intensive twelve week Field Training and Evaluation Program. He was a graduate of Manchester Township High School was a member of Boy Scout Troop 350, where he achieved the rank of Eagle Scout. In high school, he was involved with Student Government, the National Honor Society, and served as the Varsity Soccer Team captain. He attended Ocean County College, Stockton University, and is currently completing his degree in Public Administration at Fairleigh Dickinson University. Ptl. Rembach previously worked for the Seaside Park Police Department and graduated from the Ocean County Police Academy in May of 2016. 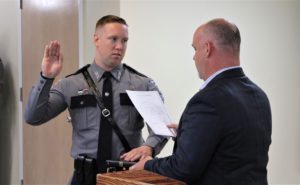 “This proud day would not be possible without the continued support of Mayor Palmer and the Township Council. I can say with sincerity and appreciation that their continued support of our Police Department and its members makes all of this is possible,” said Chief Parker. “We wish Sgt. Gatnarek and Ptl. Rembach the best of luck as they begin the next chapters in their law enforcement careers here in Manchester Township.” 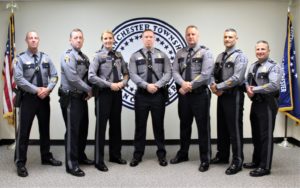