On Tuesday June 11, 2019 at approximately 4:38 pm, officers from the Manchester Township Police Department responded to the area of Manchester Boulevard near the intersection of State Highway Route 70, in the Whiting section of the Township, for the report of a multi-vehicle crash with entrapment. 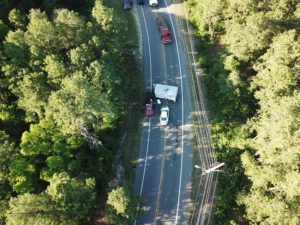 Upon arrival, officers observed a 2017, Honda Civic straddling the center lane of Manchester Boulevard with heavy front end damage. Also observed was a 1997 Chevrolet rack body pickup truck, which had been towing an enclosed trailer. The pickup truck had extensive front end damage and the trailer was jackknifed across the roadway blocking both the northbound and southbound lanes.

The driver of the Honda, later identified as 43-year-old, Pamela Fano of Toms River, was semi-conscious in the vehicle and was entrapped as a result of the damage her vehicle sustained in the crash. She was subsequently extricated from her vehicle by members of the Whiting Volunteer Fire Department.  The driver of the Chevy, identified as 22-year-old, Tyler Busch, of Manchester was also trapped inside the truck due to damage sustained in the crash. The driver of the Honda sustained a severe knee injury and a head laceration during the crash and was subsequently air lifted to Jersey Shore University Medical Center in Neptune for treatment of her injuries. She is listed in serious but stable condition. The driver of the Chevrolet complained of leg pain, but refused medical attention at the scene. 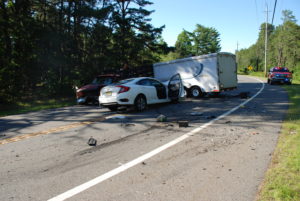 The preliminary investigation revealed that the Honda was traveling southbound on Manchester Boulevard when it crossed the double yellow centerline and struck the Chevy pick-up head-on in the northbound lane. Both drivers were determined to have been wearing their safety belts at the time of the crash and there were no other occupants in the vehicles.

The roadway was closed in both directions for several hours while police conducted the crash investigation. Assisting at the scene were EMTs from Quality Medical Transport, paramedics from MONOC, and members of the Whiting Volunteer Fire Department. This crash is being investigated by Patrolman Jesse Hoydis and Sergeant Antonio Ellis of the department’s Traffic Safety Unit. 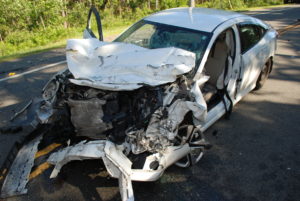