On Friday, June 14, 2019, at approximately 9:14 am, officers from the Manchester Township Police Department responded to the area of County Route 530 and Lacey Road in the Whiting section of the Township, for the report of a two vehicle collision involving a school bus with entrapment.

Upon arrival, officers observed a silver 2015 Toyota Corolla with extensive driver’s side damage, disabled and off of the roadway. Also observed, was a yellow 2016 Ford school bus, owned and operated by Hartnett Transit Service of Lakewood, NJ, with extensive front end damage which came to rest against the intersection’s traffic signal support.

The driver of the school bus, 64 year old Kim Barnes-Porter, and her passenger, 79 year old Dennis Dandorph both of Whiting, were wearing their seatbelts and sustained minor injuries.  Both were transported to Community Medical Center in Toms River by ambulance for treatment of their injuries.  The driver of the Toyota, 91 year old John Keenan of Whiting was wearing a seatbelt at the time of the collision and had to be extricated from his vehicle by members of the Whiting Volunteer Fire Department.  Mr. Keenan was transported by medevac helicopter to Jersey Shore University Medical Center for treatment of serious life-threatening injuries where he is currently listed in critical condition. 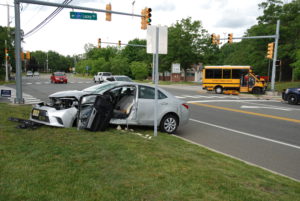 The preliminary investigation revealed that the Toyota was traveling north on Lacey Road and failed to stop at the red traffic signal at the intersection of County Route 530.  As the Toyota entered the intersection, it collided with the Ford school bus which was traveling east on County Route 530.  After the collision, the Toyota was redirected and spun 180 degrees, impacted a curb, and then came to final rest facing south in the area of 61 Lacey Road.  The Ford school bus was redirected after the collision and impacted a curb and traffic signal support where it came to final rest.